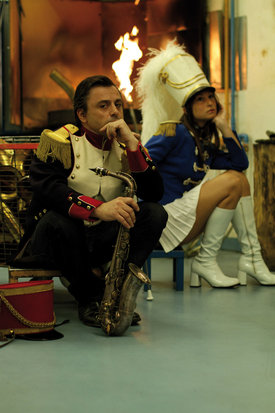 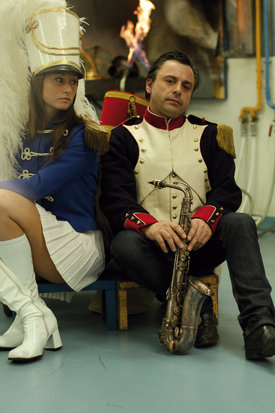 Jazz is a musical world language that knows no limits and can bridge even the longest distances. Nevertheless, cultural barriers still exist in music; for example between Germany and France, two neighbours who in general have enjoyed a close and friendly cultural relationship. What other reason could there be for the fact that the alto saxophonist Perrick Pédron has been almost completely unknown in Germany until now? The exceptionally skilled 42-year-old musician has been playing jazz professionally for a quarter of a century and has won the “Councours de la Defense” in France along with other prestigious awards, including the “Prix Django Reinhardt” and “Prix Boris Vian”. The three albums that he has released under his own name have received international acclaim and he is known as the major endorser of Selmer, by far the most important saxophone manufacturer in Europe. He has played with a host of famous French musicians like Baptiste Trotignon, Vincent Artaud and the Belmondo Brothers, as well as with US stars including Winton Marsalis, Mulgrew Miller and Lewis Nash.

The Pédron name could soon be equally famous in Germany, not only due to the fact that with his newest album he will join the ACT-family, but also because it is his most personal and extensive project so far. “I had been playing standards, but now I wanted to play my own music,” says Pédron, who after his debut album “Cherokee” (2000) was widely celebrated as an excellent Charlie Parker interpreter. Something that has fascinated him since his youth are the ‘fanfare’ brass bands that are extremely popular in his home country. In Northern France, in the Netherlands and in Belgium they can be found almost everywhere, as both amateur bands and professional groups. Similar to the marching bands in the US, they play at parties and march along the streets often accompanied by cheerleaders. Pédron was fascinated by the idea of combining this tradition with his personal jazz universe.

Nine dreams of a cheerleader are set to music on the album, each telling a different story, sometimes rather simply and concentrating on the melody, sometimes in a very expressionistic and dreamy manner - the various tracks depict nightmares, fantasies and memories, evoking different emotions for each. The only cover song of the album is “Miss Falk’s Dog” – a theme by Henry Mancini that captivated Pédron ever since he heard it on the soundtrack of an episode of the TV series “Colombo”.

“Cheerleaders“ is an opulent suite, in which the altered sounds of a brass band in the background shape the flow of the pieces. Some are based on a melodic idea, others on heavy sounding, dramatic clusters and powerful passages, occasionally recalling the bravado of Stravinsky. Pédron’s concept consists of surprising the listener time and again. “I wanted to include a variety of styles which have influenced me musically- not only jazz, but also some of the music that I listened to when I was younger, stretching from Neil Young to Pink Floyd.” This is exactly how the album can be described, and it is full of ideas. Yet there is a lyrical and melodious core that remains faithful to classical jazz – the saxophone of Pierrick Pédron, whose tone resembles that of his famous bop idols, such as Charlie Parker, Cannonball Adderley and Phil Woods.

“I wanted to combine jazz and rock, but I didn’t want the result to be typical jazz rock. ‘Cheerleaders’ is compositional jazz that arises from the exchange of ideas between the musicians. But it should still sound like rock that is produced like the super groups of the 70s.”

Thanks to two fans and supporters, who got him sponsorship for the project, Pédron’s dream could be fulfilled. “’Cheerleaders’ is the most extensive and expensive jazz production that I have been involved in.” The brass section was recorded under the direction of Ludovic Bource in a studio in Paris. After that, the recordings were carried on with the band in Brussels in the studio of the successful pop producer Jean Lamoot. The band consisted of Pédron, his longstanding companion Vincent Artaud on bass, the pianist Laurent Coq (who also arranged all the pieces), drummers Franck Agulhon and Fabrice Moreau and the guitarist Chris De Pauw. “As a jazz musician – and that is how we see ourselves – you have the opportunity to do what you want. No-one tells you to write certain kind of music because the fans want it,” says Pédron. On “Cheerleaders” he takes this opportunity with a topic that is completely new. The result is an album that is like a breath of fresh air and that will surely make the name Pierrick Pédron famous far beyond France.