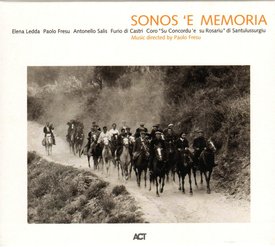 Sardinia has been more often associated with the marauding gangs of former times than with interesting, let alone innovative music. Yet this Mediterranean island has a lot more to offer than "just" the polyphonic singing of the "Canto a tenores". It has, for instance, one of the oldest musical instruments of Europe, the launeddas, which has remained virtually unchanged in the course of the last 2000 years. The island’s ancient culture continues to pose riddles: the Sardinian language, with its three distinct dialects (the Sardinians themselves speak of them as three separate languages) is an essentially different language from the Italian. Over the centuries Sardinia developed into a junction between Europe and North Africa, between the Western and Eastern Mediterranean. But musically, this island with its rich culture (a culture often veiled in obscurity)  is close to being a clean slate. Paulo Fresu said about this project that, "I  hadn’t forgotten Sardinia’s music, but there weren’t any good modern versions that hadn’t fallen into cliches, or smoothed the edges. I wanted to correctly represent the music’s rich tradition as much as to show it’s modernity".

It isn’t fictive folk music, it isn’t jazz, it isn’t classical, it isn’t traditional or world music – it’s simply Sardinian music from Sardinian musicians. The idea emerged through the work of  the film director Gianfranco Cabbido, who resides in Rome. While doing research some eight years ago in preparation for his film Bakunin’s Children, he was surprised by his discovery of an abundance of film material covering life in Sardinia from the 1930’s to the 50’s.  The film was a reflection of what was even for him, as a native Sardinian, an almost forgotten world.  He lovingly restored the material, and soon had developed the idea of putting the material together as a sort of documentary. And what made more sense than to have musicians accompany this visual record live on stage? The document was from the period of the silent movies, so why not do it as it had been  done in those earlier days? It was only logical for the onetime amateur jazz musician Cabiddu to come up with the idea of giving a musician such Paulo Fresu this task. The ground-work for "Sonos e memoria – Sound and Remembrance" was laid. "I don’t want to show the traditional side of Sardinia in the music. The film shows that. I wanted to track down the elements of the traditional music that still exist and are relevant today. We show what has developed out of the tradition up to the present day." (Paulo Fresu).

The first part of the project shows how varied the music is, as the accompanying musicians individually portray their view of Sardinian music. Elena Ledda, the uncrowned queen of Sardinian folk music, opens this section with her group Sonos. Ledda is a continuing leading light in the World Music scene. She is also the only woman who has mastered the Canto a tenores, Sardinia’s polyphonic song form which is normally reserved for the men. Since her meeting up with the group Sonos and Mauro Palmas some 15 years ago, she has been working for a contemporary interpretation of traditional Sardinian music. Accordionist Antonello Salis has gone in another direction. He made his name working beside musicians such as Richard Galliano, and colleagues such as Paolo Fresu enthuse that he can simply play everything, whether it is tango, classic, jazz, or traditional music. The choir "Su concurdu ‘e su rosariu" from the town of Santulussurgiu, come together only on festival days and for special performances. Otherwise they go about their normal (non-musical) business.

And then naturally there’s Paolo Fresu, the (Sardinian) trumpeter who now lives in Paris. He is one of the few Italian jazz musicians who has been able to establish himself in jazz’s major leagues. His multifaceted style is hard to believe. If there is something that characterizes him, then it is the continual search for new ground. Slowly, almost imperceptibly the first section comes together, the musical vision melds, until the auditorium lights dim, and the pictures appear on the screen. Pictures of work in Sardinia’s coal mines, work in the fields using methods that have scarcely changed over the centuries, the village festival, the hunt, the horse races, and at the end, the inquisitive glance of a young girl looking directly into the camera – a look of innocence and curiosity concerning the times that are to come. A look at an up-until-then widely unknown technology, a technology that will in a short time fundamentally change the lives of those being filmed. The music grabs at the threads of these lives, spins them further along, and completes the connection between past and present – while keeping its distance from any trace of nostalgia.

That Gianfranco Cabbidu’s and Paolo Fresu’s vision has worked has already been shown by the project’s great international success. The musicians have performed not only in Italy, France, and Spain; they have traveled to Argentina and Brazil. Occasionally they have been supported by musicians like Nguyen Le. Although this "positively one-time" project has already been performed again and again over the last six years, virtually every performance is a new premiere, a new festival of music. It is also a reunion, since the musicians seldom see each other outside of  the concerts. So this album is witness to a rare moment, one which the musicians on stage share with their audience. It is witness also to a living culture in search of its own historic roots far outside today’s heavy-trodden musical pathways as it travels on its way to a unified Europe.