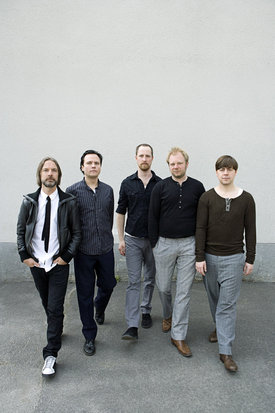 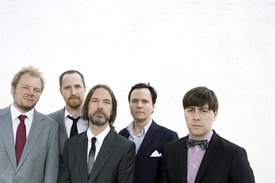 The Oddjob Quintet is a prime example of why Scandinavian musicians play such a prominent role in the latest happenings in jazz. It’s not just about technique and virtuosity; rather its unconditional concentration on a unique sound and the impact of melody. In Scandinavia, ear training is more important than it is elsewhere. At the same time Scandinavian musicians consequently have an unrivalled openness for styles and genres. No wonder, then, that Oddjob also became involved in the recent resurgence of the jazz-rock of the 70’s; yet Oddjob’s approach sounds different.

The project came about accidentally. Shortly after the beginning of this new millennium four of Sweden’s most accomplished studio musicians and jazz exponents found themselves together as a tour band for resident soul star Eric Gadd. Trumpeter Goran Kajfeš has worked as a sideman for such pop stars as Sting, Eagle-Eye Cherry, Janet Jackson, along with the Cardigans. He has also caused a sensation with the soul-jazz band Blacknuss and his own projects, mixing Afro-American jazz with electronics and mysticism. Saxophonist Per “Ruskträsk” Johansson has worked with jazz greats Roy Hargrove, Fred Wesley, Randy Brecker, and Nils Landgren. Together with Kajfeš, he played with The Flesh Quartet, Blacknuss, and Sting. Bassist Peter Forss has worked with Sophie Zelmani and Rebecca Törnqvist, among others, while drummer Janne Robertson has worked with a number of famous Scandinavians, including Mauro Scocco, and Titiyo and Lisa Nilsson.

They soon began tossing around the possibility of working together on a project. “We just talked about it; never played anything out,” explains Per Johansson. That was soon to change; pianist Daniel Karlsson, a musician who has played with the likes of Till Brönner and ACT star Viktoria Tolstoy, joined the group, and Oddjob was born. In 2002 they recorded their first CD titled, appropriately, Oddjob. The music is as unpretentious and straight-forward as the title; its humorous approach to the fusion tradition immediately attracted attention, and the CD was honoured with a Swedish Grammy. Their fame increased with the releases of Koyo and Luma, and now with Sumo (ACT 9472-2), their ACT debut, they take the next logical step onto the international stage. On that account the five have expanded their sound-search – Rare-Groove and Psychedelic fans will get their money’s worth.

After a breath of the Caribbean in the first piece (“Kingston”), the band gets directly to the point with “The Big Hit”. Riding over a bouncy, elastic rhythm, trumpet, piano, and percussion fan out over the theme. The five remain true to this schema: invariably they stay within the framework of a basic (often “black”) motif – sometimes initiated by the rumbling Hammond organ (“Painkiller”), sometimes by the struck bass (“The Day TV Stood Still”), or from special guest Stoffe Wallman’s OSCar Synthesizer. Whether it’s a fragmented miniature or a long, sweeping piece, there is a continually evolving music filled with exciting interplay and a love for the finer details. “Of course we rehearsed,” say Johansson and Kajfeš, “but in the end we work very spontaneously. A lot of it first developed in the studio.” That extends right up to the unusual instruments, such as glockenspiel and wine glasses (on the impressionistic “Småland”, named after the hometown of Swedish glass blowing), and the sound-patina with which Karlsson’s keyboard instruments have coated several of the tracks.

The musicians’ treasure trove of experience plays a large a role: Johansson states that, “After the many stages we’ve been through in our careers, we’ve all come to the point where we are looking for and finding our own thing. Now it’s a lot of fun to combine our own sound with the influences of the greats we grew up listening to or with whom we have played.” The two homages on Sumo are typical: “Like Josef” was meant for Joe Zawinul, and works out of the typical Weather Report style; in turn, “Golden Silver”, naturally, is an homage to Horace Silver, his incomparably light groove, and his humour.

Humour and fun are the other common denominators that run through Sumo. They’re expressed in the breaks of clapping and whistling in the traditional folk song “Where Did You Sleep Last Night” – a piece that many musicians including Bob Dylan, The Grateful Dead, and Nirvana have interpreted in the course of rock and pop history. But they are also evident in some curious trumpet riffs as well as some of the titles: especially on the fastest number that works out to be a blues (“Sewerside Blues”), and the especially bright and cheerful final number which carries the name of the prophet of the Apocalypse, Nostradamus – with Oddjob, surprises are guaranteed.