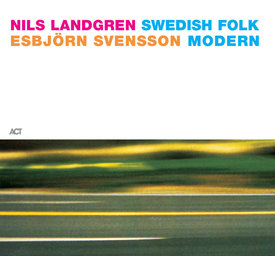 Swedish Folk Modern first appeared in 1998 and was the first duo collaboration between Nils Landgren and Esbjörn Svensson. At the time the well-known German jazz journalist and pianist Michael Naura wrote: "Don’t ignore the CD Swedish Folk Modern, with first class Swedish improvisers Nils Landgren (trombone) and Esbjörn Svensson (piano). At last something beautiful after all the rubbish which is appearing on the market. This CD release became a worldwide success and was followed by the CD Layers Of Light (ACT 9281-2) in 2001.

In the mean time they have undertaken several extended concert tours, among which was the concert in Prague on 17 February 2001. From this memorable concert the title Lapp-Nils Polka has been added as a bonus track for the reissue of Swedish Folk Modern. A particularly interesting reworking of a classic.

Jazz is world music in the best spirit of this word. Already at the time of its first appearance during the early part of the last century in the multicultural melting pot of New Orleans, jazz was already a mixture with mainly African and European roots. Today jazz is the way of describing some of the most important musical forms of expression of the Twentieth Century. The social utopia of "liberty, equality, fraternity" is nowhere so convincingly brought into reality than in jazz: the freedom of individuals joined in a grouping of equals. In no other form of music can a musician take up his instrument at any time and with equal spirit start playing spontaneously. This has been regarded in jazz for a long time as a standard practice, before the term "globalisation" entered the vocabulary.

When Afro-American musicians such as John Coltrane rediscovered their musical heritage and highlighted the importance of their musical vocabulary, in Europe musicians such as Bengt-Arne Wallin were starting to develop their own fascinations with the rich and musically relevant folk music for themselves and for jazz. Quincy Jones, who at that time was living in Sweden, was especially excited by Wallin’s recording "Old Folklore in Swedish Modern" – a release that today is regarded as the birth of a world jazz "Made In Europe".

For ACT, World Jazz is a central focus of its range of productions.  From "Jazzpaña" Vince Mendoza - Arif Mardin (ACT 9212-2), "The Afro-American Epic Suite" Yusef Lateef (ACT 9214-2), "Europeana" Michael Gibbs - Joachim Kühn (ACT 9220-2) to "Tales From Viêt-Nam" Nguyên Lê (ACT 9225-2) extends a spectrum of a borderless music programme.Almost all well-known Scandinavian jazz musicians regard themselves as part of this tradition, including Nils Landgren and Esbjörn. Svensson. They have unreservedly made this homage to the folk music of their homeland for ACT and thus sustain the vitality of this music.

Nils Landgren was born in 1956 and grew up surrounded by the music of his father, a jazz cornettist, and the church music of his grandfather, a pastor. At the tender age of six, he began to play drums, discovering the trombone at 13. His teacher at the Swedish Music Conservatoire was none other than Bengt-Arne Wallin. In 1981 Thad Jones invited Nils Landgren to be solo trombonist in his well-known big band. After the dissolution of this band, Nils founded his first jazz-rock band in 1983, and in 1987 recorded "Miles From Duke" with Bengt-Arne Wallin. Nils Landgren’s Funk Unit was founded in 1992 and recorded two internationally successful albums for ACT. But throughout this time, Nils, just like his teacher, never lost his affinity with his musical roots. In 1995 he collaborated with Tomasz Stanko on an album of church music ("Gotland", ACT 9226-2).  In 1997 he recorded "Swedish Folk Modern" with his old friend Esbjörn Svensson.

Esbjörn Svensson was born in 1964 and grew up in a family where his mother listened to Chopin and his father to Duke Ellington. This musical mix and his first experiments on a small electric organ formed the basis from which Esbjörn has now climbed to the peak of pianists with the highest international reputation. He has played with some of the most famous Swedish musicians, not least the Nils Landgren Funk Unit (ACT 9243-2) and has recorded many albums under his own name, not least "EST Plays Monk" and "Winter In Venice". He has sought challenges and the unexpected. He has resolutely gone beyond the recognized narrow boundaries of jazz. With Nils Landgren on "Swedish Folk Modern" he has constructed an album which is both simultaneously a challenge and a sign of musical unity.