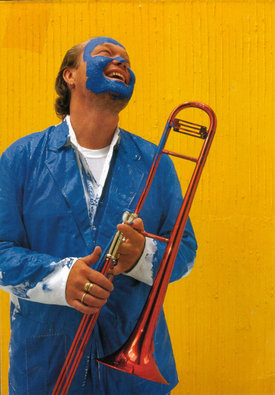 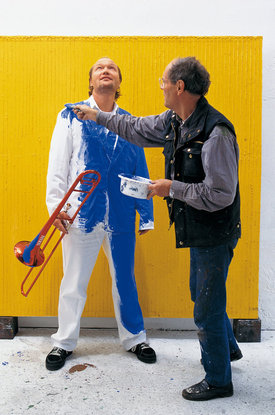 Recorded by Geoffrey Peacey at Peer Studios, Hamburg,
May 1996
Produced by Anselm Kluge and Nils Landgren

A TRIBUTE TO CANNONBALL ADDERLEY.
What is Funk? Funk is Soul with the resources of Jazz: the fluid boundaries between religious service and a party.
The record PAINT IT BLUE is dedicated to the man who for many still today embodies the central figure at the genre’s source: Julian Edwin "Cannonball" Adderley (1928 - 1975). Maybe he didn’t invent Funk. Together with his co-musicians in his 60s quintet, Cannonball’s alto sax style, his attitude, humor great musicality, and his love for his audience allowed him to become a synonym for FUNK.
NILS LANDGREN, born in 1956, grew up between the music of his father, a Jazz cornet-player, and the music of his grandfather, a pastor on the island Gotland. He first heard Cannonball Adderley on Kind Of Blue. In this Miles Davis Sextet of the late 50’s, they were all together: "Miles, the master of beauty. Coltrane, the master of sound. And Cannonball Adderley, the master of funk," Nils Landgren writes in the liner-notes to Paint It Blue. From that point on he procured everything of Cannonball’s that he could lay his hands on. Landgren never experienced the revered master live. "Without the soul of Cannonball it would have been impossible to form my group Funk Unit many years later," he writes. Is it a coincidence that  this band had its greatest success to date with the guest alto saxophonist, Maceo Parker (on ACT 9223-2)?

The enormous liveliness and freshness of Cannonball Adderley’s music becomes apparent to anyone listening to his recordings today. Someone like him does not need a museum and that is why Paint It Blue, Nils Landgren’s second Funk Unit production for ACT, is more of a declaration of love to the spirit of Funk à la Cannonball than a musical show of reverence to a deceased idol. Nils Landgren has developed, deliberated and played Cannonball further. Seven of the twelve tracks are Nils own compositions and, more importantly, every bar of the famous Adderley-numbers like Walk Tall or Mercy, Mercy, Mercy, with all love for the originals, sound like here and now. Seamlessly, Nils Landgren inserts Rap elements of the 27 year old MAGNUM COLTRANE PRICE. The autodidact sings everything from Hip Hop to Rhythm ‘n’ Blues that’s good and also plays numerous instruments. With one exception, the remaining lyric contributions are from Adderley himself. Landgren edited Cannonball’s live concert announcements into his own arrangements, so that the time jump between the original and the nouveau arrangement appears non-existent. An effective device that literally brings this revered musician into the fold of Nils Landgren’s Funk Unit.
Whoever speaks of Cannonball Adderley, must also speak equally of his brother Nat Adderley. It was an obvious thought to invite the most important brothers in Jazz after the Adderleys to guest on Paint It Blue; with the high energy Funk-Jazzrock of the late 70s, the Brecker brothers have proven worthy heirs to the Adderleys. Both of them solo on Landgren’s track You Dig.
The equally noble and forcible groove is delivered by the sideman to countless Soul greats, BERNARD PURDIE. Bernard’s own stylistically related production with the Brecker Brothers, Nils Landgren, amongst others is now strongly in the public consciousness on SOUL TO JAZZ, ACT 9242-2. Much like Cannonball Adderley, AIRTO MOREIRA owes important impulses to his time with Miles Davis.
NILS LANDGREN, the man with the red trombone and the blue-painted overalls, the initiator and one paying homage, combines the variety of his possibilities of expression here. His eventful musical curriculum vitae gives a hint of these. As a six year old he already played the drums - not the worst start for a career as a Funk musician. Seven years later, Landgren changed over to trombone and after a music degree he moved to Stockholm, aged 23. Years of apprenticeship with Jazz and Rock bands as well as in the theatre followed, until in 1981 he became first trombonist in Thad Jones’ Bigband. He formed his first Unit in 1983 and a year later his debut record under his own name, Planet Rock, appeared. Since 1991, Nils Landgren has been a regular guest at the Baltic Sea jazz-festival, Jazz Baltica; he is the only musician to have been a member of all the Jazz Baltica-Ensembles, which have changed in line-up from year to year. Internationally he has played with artists as diverse as Marcus Miller and Kenny Wheeler, Abba and Herbie Hancock, The Crusaders and David Murray - to name a few.
Paint It Blue is possibly Nils Landgren’s most lavish record to date and with some certainty also his best. Landgren’s playing is cool and smooth, with warmth, temperament and thought. Here his sound combines organically with everything he surrounds himself with. The album sounds as if the recordings for it were a pure joy for all participants. Nils Landgren has the prerequisite for serious fun, the gift of intelligent serenity.