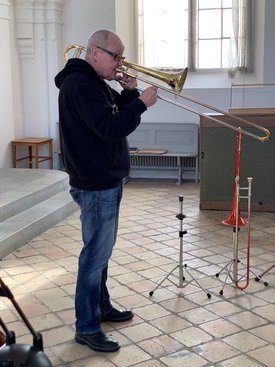 The Man with the Red Horn. Nils Landgren’s nickname is apt. It brings to mind the fiery, coruscating energy with which the charismatic, soulful trombonist leads his Funk Unit. And yet there are many other facets to this hugely popular Swedish musician. In the course of a 40-year career, he has taken on many roles, producing albums, directing festivals, leading big bands, teaching in universities...

And yet his musical personality also has a very different side, one that is much more delicate and softer. Ithas previously come to the fore in various contexts, notably at the end of the 1990s in his duo with Esbjörn Svensson and their groundbreaking interpretations of Swedish folk music on the albums "Swedish Folk Modern" and "Layers Of Light". He has also increasingly nurtured it as a singer of ballads, with a very appealing warmth and lyricism. These have also been the defining characteristics of the Christmas programmes which he has created every two years since 2006 on the "Christmas With My Friends" tour and album series. And it is this contemplative and melodic dimension to Landgren’s work which is now placed front and centre stage. Here is a genuine premiere: Nils Landgren's first ever solo album.

The fact that “Nature Boy”, the otherworldly song made famous by Nat King Cole, became the album’s title track is no accident: it is about a "strange boy" who has "wandered very far over land and sea " to realise that the most precious thing is "to love and be loved in return ". These sentiments are analogous to the story of how the album itself came into existence. On 13 March 2020, Nils Landgren had returned to Skillinge in southern Sweden from Hamburg, having taken the last flight before borders closed and Europe went into lockdown. For a person who in normal circumstances would hardly ever spend a whole week in the same place, Landgren suddenly and unexpectedly found himself for several months with his wife Bea in their old house near the coast. A "strange but personally wonderful time", as Landgren remembers, but around Christmas-time he began to miss the "Christmas With My Friends" tour that would normally have been happening. So he suggested to Bea that he might at least play and record alone for her in the church. She immediately loved the idea.

Landgren put in a request to the priest at the church nearby, Ingelstorps Kyrka. The priest, Maria, ensured that the church would be heated and that everything would be ready for Landgren. And then, when the moment came and he played the first solo notes – "only me, myself and my trombone" – it was almost a shock: "Such a beautiful sound, making the tone of my trombone just fly through time and space. Bea and I looked at each other in silence, knowing that this can become something special."

It was also special because Landgren only chose pieces with a personal significance for him. In the first instance there are the traditional Swedish songs such as "Allt under himmelens fäste" (everything under the sky) or "Värmlandsvisan" (Värmland song), which he had sung in church as a child – and also "Den blomstertid nu kommer" (now comes flowering time), written in the 17th century by Israel Kolmodin, an ancestor of Landgren’s. Then there are are traditional songs which were around when he was setting out as an instrumentalist, such as the German "Der Mond ist aufgegangen" (the moon has risen) and "Morning Has Broken", made famous by Cat Stevens, but in fact a hymn tune from Mull in Scotland; then two Duke Ellington songs – "In a Sentimental Mood" and "Solitude" – which had once sparked his love of jazz and big band music; one of his own early compositions "A Minor"; and finally two wonderful songs by the Swedish ballad singer and national icon Evert Taube. The album ends with Taube’s lullaby "Sov på min arm" (sleep on my arm), which Landgren heard very often as a child.

As Landgren hoped and predicted, “Nature Boy" has indeed become something very special, and in several respects. It shows him from a side that "is always there, but not always to be seen", as he says. Inevitably, the listener is drawn in by the depth of feeling, reinforced by the serenity of Landgren's playing and the freedom of the arrangements with which he gives new form and meaning to the songs. And there is also the magical power of the sound of the trombone in the reverberant acoustic 19th century church. Landgren had never recorded alone before. With its genesis in the circumstances of a specific time, this solo statement looks back at a 40-year career and illuminates it with sounds that are timeless.