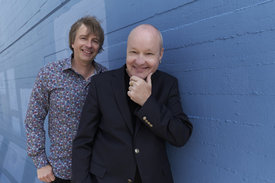 Cover art by Janika Sootna: “Oops…” (edited), by kind permission of the artist

Duo - it's the most reduced way of making music together. At the same time it can open a whole musical world without borders. Two musicians acting as one and in a dialogue at the same time. Call and response - it's jazz in its purest form. Sometimes less is more…

The sound world of “Kristallen” relishes the moment when the surfaces and edges of crystals shimmer and cast off unexpected colours. There is a certain stillness, and also room for the imagination to unfold. Magic with fragility. Nils Landgren and Jan Lundgren have a consistent vision of lyrical chamber jazz which flows gently and naturally. Rather than clamouring for our attention, this is music which reveals its true beauty the more attentively one listens.

The tone of the album is set from the opening track, “Blekinge”, a reminiscence of the tranquil part of Sweden from which Jan Lundgren hails. It is sublimely light yet thoughtful, a subtle musical language which draws on Swedish folk music and tinges it with jazz. The next track “Byssan Lull” follows on seamlessly: a solemnly intoned folk melody develops into a lively blues. “Hornlåtar” features delightful interplay between trombonist and pianist who take some of the traditional short horn calls from the Swedish tradition and subtly adapt them. This track brings back memories of the 1997 duo recording with Esbjörn Svensson, “Swedish Folk Modern”. Two other pieces also have a profound personal significance for Nils Landgren: “Olu” was on his album ”Gotland” (1996), recorded with Polish trumpeter Tomasz Stańko who died in 2018. Finally, “Värmlandsvisan” is a homage to Landgren’s native land.

In addition to his own compositions, Jan Lundgren has included tunes by two inspirational pianists: “Country” by Keith Jarrett and “The Wedding” by Abdullah Ibrahim. To complete the selection, there are also pieces from the Great American Songbook and Beatles songs.

The wonderfully instinctive way in which Nils Landgren and Jan Lundgren interact could already be admired on the Leonard Bernstein tribute “Some Other Time”. Now with just the two of them, their sixth sense, their authentic feeling for the same musical styles is all the more evident. A Nordic spirit, deeply romantic emotions, impressionistic colouring and an affirmation of the American jazz tradition: all of these pervade “Kristallen” and bring a special magic to it. Through their deep affinity and their cohesion, this duo has meticulously shaped a radiant and many-hued musical diamond.