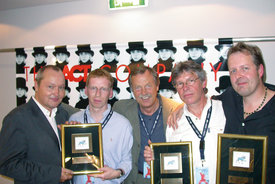 Nils Landgren isn’t a name only to be found among "the top rank of European jazz trombonists" (Der Spiegel). He is also one of the wide-ranging set of artists to be found on the European jazz scene today. "A musical omnivore" (Frankfurter Allgemeine Zeitung) and "a marvel of flexibility"  (Jazzthetik), whose interests and output cover many bases: whether the man with the red trombone is performing one of his frenetic concerts to enthusiastic fans with his grooving Funk Unit, singing with "hypnotic charm" (Frankfurter Allgemeine Zeitung), devoting himself, in collaboration with Esbjörn Svensson, to the reworking of Swedish folk songs, or celebrating kitschy chamber music or big band jazz – all reflect the many sides of the same person.

After a two-year self-imposed rest from performing funk, during which Nils Landgren has been busy producing and singing ballads on Sentimental Journey (ACT 9409-2) and on Rigmor Gustafsson’s album I Will Wait For You (ACT 9418-2), Mr Red Horn is now devoting his time once again to his Funk Unit, which ranks, quite undeniably, as "the best European funk band" (Stereo Magazine).

Now, exactly 30 years after ABBA’s international breakthrough at the Eurovision Song Contest, he has undertaken a highly personal tribute to one of the greatest pop bands ever, working together with his grooving band, which "drives young people into a frenzy and yet also is taken seriously by the snobbish jazz lovers" (Spiegel).The new album is called FUNKY ABBA – and Nils can call it that with much justification, through his long-standing friendship with Benny Andersson. Twenty-five years ago, on the strength of his special trombone sound, Benny asked the fresh-faced Nils to join him in the studio to play on the ABBA song "Voulez-Vous". This time it was the other way round: Benny couldn’t wait to take part on at least one track of FUNKY ABBA.

We’ll leave the rest to Nils Landgren to describe in his own words:

When I first asked Benny Andersson for his blessing to make an album titled FUNKY ABBA’ he just said: ‚Is that possible?’

‚I think yes’ I replied.

‚OK, do it!’ Benny said with a smile and so ahead I went.

We booked the scene of the crime for this recording. The great Polar Studio A where all the ABBA songs were recorded to get the right vibe from that old tribe.

I tell you, it´s still in those walls:

all that great stuff that was once

What a challenge to dig

into this treasure, it was!

Thank you Björn & Benny for all the great songs!

If we succeeded to make them funky, it´s up to you friends

out there to decide.

Just promise me one thing: