Nils Landgren
Funk is my Religion 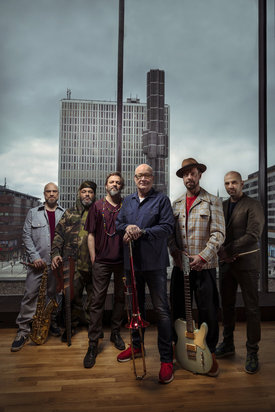 Produced and mixed by Magnum Coltrane Price at Retrotech Studio

Back in 1994 when Nils Landgren started up his Funk Unit, there were those who asked whether there was actually any need for Swedish funk. After seventeen years, ten albums and several hundreds of concerts, the question has basically answered itself: to find the most fired-up take on this music anywhere, a sound which is inextricably welded into soul, rhythm and blues and jazz, and in which all of the instruments – and the vocals too – have an irresistible rhythmic urgency about them, this is definitely the band to see and hear. And if one turns to the pioneers, godfathers and grandees of the funk world – Maceo Parker and Fred Wesley, the musical prime movers behind James Brown, Ray Parker Jr., or Joe Sample from the Crusaders – then there’s no need to look any further: each and every one of them has played with the Funk Unit.

And the Funk Unit’s story is far from over. Not even this pandemic was going to hold back their eleventh album. "Originally we wanted to record at Palma Studios in Mallorca, but Corona put a stop to that," Nils Landgren explains. "Then we decided we’d record at "Redhorn District" in Bad Meinberg, but nothing was working in Germany either. So what should we do. Give up? The Funk Unit? No chance! I asked my friend Björn Yttling if we could go to his Ingrid Studio in Stockholm, and he said ‘No problem.’ A few days before the session, the Swedish authorities decided that no more than eight people could assemble indoors at once. So, with the six of us plus just one sound engineer, we managed to stay under the limit."

So it is the core members of the Funk Unit who are to be heard on this album. Together, they form a close-knit clan from the "Stockholm Underground". Apart from Landgren himself, there is Magnum Coltrane Price on bass – he has been a member of the band right from the beginning, and also has a producer credit here. The others, who have gradually become part of the fabric of the band, are Jonas Wall on tenor saxophone, Andy Pfeiler on guitar, Petter Bergander on keyboards and Robert Ikiz on drums. What unites them is best expressed through the title of the new album: "Funk Is My Religion". And it is indeed that veneration of the great idols, combined with their own qualities – personal, individual, and European – which lie at the heart of the unparalleled success of the Nils Landgren Funk Unit, and may also be the secret behind its remarkable and possibly unique longevity.

Everything that goes to make up superb funk is to be found on "Funk Is My Religion" – and more. It starts with the warm soul of the opener "Amanda", in which gentle keyboards, a soft brass section and a dreamy trombone solo all set the tone. Then we move into funk which is still calm but also hard-hitting on "Anyway You Want It". The tempo picks up a lot with "See Ya In Court", then settles into a bouncy groove in the title track and also shows the melancholic, bluesy side on "ES In Memory". Classic, gospelly syncopated funk to get people singing and bopping along to is there in "Doing It For The People"; we’re into a thrilling reminiscence of James Brown in "Play Funk", the jazz soloists have their way with "Brand New Funk" and then on into the exuberant final anthem. We have some great basslines, some slick and energetic back-and-forth between in instrumentals and vocals. As the title of their 2013 album reminds us, there is some top-notch "Teamwork" going on here: as well as Landgren, the album has numbers composed by Price, Pfeiler and Wall.

"Each of the pieces tells a story," says Nils Landgren. "Sometimes they are about people who have inspired us or whom we admire, sometimes they are simply things that need saying - in the same clear way that the title of the album sums up what it’s all about." Among the people remembered here is the great Esbjörn Svensson, who tragically died, and far too young. He helped to launch the Funk Unit, and here Landgren plays "ES In Memoriam", a beautiful, sad melody on trombone. Another hallmark of Landgren is his admiration for strong women. So, on this album, young poet Amanda Gorman, "who made such a strong impression at the inauguration of Joe Biden", and Kamala Harris, the first female, black and Asian-American vice-president are both dedicatees of songs which express respect and admiration, soulfulness and love.

The album is in part a celebration of the USA as "the largest and most important democracy. I keep in touch with events there in spite of the pandemic and want to pay tribute to those who have fought for its founding principles," says Landgren. It is also the country which allowed him to find the musical roots which he has gone on to develop. "Without my father playing jazz trumpet, and without the soul records my older brother played me, what we do wouldn't exist. This is such a tasty soup with so many ingredients." In essence, "Funk Is My Religion" also carries the legacy of many predecessors and role models for this incomparably physical and vital music: "It's fantastic. It’s no plastic!", as the lyrics of "Play Funk" describe it. What started in Sweden can reach out to the whole world. As the title of the closing track makes unmistakably clear: "NLFU will never stop"!