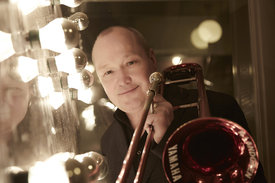 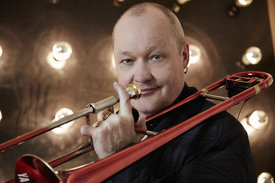 Not only the trombonist Nils Landgren has built up an enormous fan base over the decades – with his Funk Unit, with big bands and alongside the greats of jazz music – so has the vocalist Nils Landgren. His clear, throaty and yet mellow voice is very distinctive, and perfect for ballads. Apart from on his Christmas anthology "Christmas With My friends," it could also be admired on "The Moon, The Stars And You" that came out two years ago. The moonstruck nature of jazz was the theme on that record, and both the choice of songs and the list of guests, from Joe Sample and Steve Gadd to Joao Bosco and Richard Galliano, were colourful. What is more, Landgren put together a rhythm section here that understood each other intuitively. Alongside his companion of many years Lars Danielsson on the bass and cello, and the Viktoria Tolstoy drummer Rasmus Kihlberg, he also added Michael Wollny as a consummate sensitive piano accompanist to the mix.

"Never change a winning team" they say, and so it was that for his new vocal and ballad project, Landgren once again reverted to this select band of brothers – with the further addition of guitarist Johan Norberg, with whom Landgren has performed on and off for decades. "It is my dream team, and one that I hope will play together for a long time," says Landgren of this group. It is also ideal for the approach that Landgren pursued on "Eternal Beauty": "I wanted to make a really homogenous record – just us playing the simple and beautiful melodies simply and beautifully." The album title indicates the direction that the songs chosen by Landgren, Wollny, Norberg and producer Siggi Loch took: "The music and lyrics had to fit us, and they had to be songs that are eternal for me, personally."

It is a criterion that most of the songs on "Eternal Beauty" will certainly also meet for many listeners, from George Harrison's "Isn't It A Pity" to Mr. Mister's "Broken Wings" on through to "We don't Need Another Hero", made popular by Tina Turner. And not just the hits adapted from pop, no, also intelligent jazz ballads the likes of "One More Angel" from the jazz bassist John Patitucci and "Another Kind Of Blue" by the New York-based German guitarist Torsten de Winkel. Michael Wollny wrote the title track together with Eva Svensson, Esbjörn Svensson's widow.

So it is no coincidence that "Eternal Beauty" is also an homage to Esbjörn, without that being said explicitly anywhere on the record," says Landgren. "For me, Esbjörn is one of the greatest musicians of our age. And although he isn't around anymore, we still kind of communicate. I think of him a lot, and fortunately I'm really close to Eva and the kids. Our families are very close. That's why I wanted to record some numbers from him to. Johan's track "One Frozen Moment" also alludes to the moment when we heard of his passing."

It only makes sense that the album ends with Svensson's "Love Is Real," the song that will without the shadow of a doubt be one of the first and most important when and if a Great European Songbook is ever compiled. But one thing is important to Landgren: "Even if our thoughts went out to Esbjörn, Eternal Beauty is anything but a gloomy album. He wouldn't want that either. All the lyrics revolve around love and relationships, but they aren't one-dimensional. Like James Taylor's "Don't Let Me Be Alone Tonight," which I played once in Salzau with Michael Brecker, Pat Metheny and Esbjörn. I love that song. And the age-old folk number Green Fields. You can even interpret that as an environmental song if you are that way inclined."

So, much is left up to this talented team that Landgren trusts without reservation: "We did have an idea of how we could play each of the songs, but we didn't prescribe much and we arranged them very sparingly, because with these guys the musical concept arises when we meet. When we start to play, the magic begins."