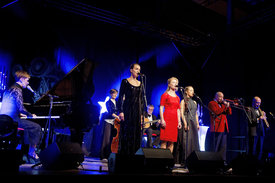 There is a synonym for the words diversity, curiosity and zeal: Nils Landgren. “Mr. Red Horn” swings brilliantly from one perspective to the next, also because he needs this constant change. Landgren embodies not one but two souls: When the audience sees him with his “Funk Unit”, the Swede shows himself from his masculine and distinct, relentlessly grooving side and acts the jazz action hero. However, there is also a gentle melancholic, highly sentimental Nils Landgren. He can be seen during Advent time, for example, when the instrumentalist and singer celebrates “Christmas With My Friends” or in his ballad projects, in which he intones on the trombone with incomparable smoothness and his highly individual, fragile voice touches the heart and the soul with a remarkable sensibility.

Christmas without the songs – it's unthinkable. And yet how can one be open to different musical styles and also strike a good balance between them? How can all the right moods for the festive season be captured? Should it be classical or soulful, gospel or pop, blues or jazz?
The result can often be just one style of singing from one person – but that’s not the case with Nils Landgren's "Christmas With My Friends". A sequence which would normally have had to be patched together from a wide range of interpreters is all there, and from just the one source. Alongside the Swedish trombonist/singer himself, there are four vocalists, Jeanette Köhn, Ida Sand, Jessica Pilnäs and Sharon Dyall, and their fundamentally different voices allow them to combine many musical genres. The way these four co-exist so harmoniously is just one of the reasons why "Christmas With My Friends" has proved to be quite so popular and successful over the past twelve years. Accompanied by Eva Kruse on bass, Johan Norberg on guitar, and saxophonist Jonas Knutsson, the ensemble reinterprets Christmas songs from all over the world and in a jazz spirit, bringing together the well-known with the less familiar, combining the cheerful with the contemplative.

Soprano Jeanette Köhn sets the classical tone. She has been garlanded with all of the most important prizes in Sweden, including a Grammy. She also tends to be the singer who steps into the limelight for important official celebrations in Sweden such as the King's Birthday, the Nobel Prize Ceremony, Astrid Lindgren's funeral or the Royal Wedding in 2010. And she brings exactly that sense of occasion to "Christmas With My Friends", notably in the album's reflective conclusion with the Swedish traditional song "Den signade dag" and Mendelssohn's "Hark! the Herald Angels Sing". She is to be heard in delightful vocal duets with Nils Landgren – a medley from "Little Drummer Boy" and "Peace On Earth" – and also with Ida Sand in "Christmas Lullaby".

And mentioning Ida Sand, she is not only the pianist for this little Christmas ensemble, she also brings her bitter-sweet voice to it. For many years she has been one of the outstanding white soul voices in Europe, and is the perfect singer for the bluesy "Merry Christmas Baby", and for Dave Grusin's soul song "Who Comes This Night".

Jessica Pilnäs has a clear and bright timbre, hers is a disarmingly light voice, and she has a fine understanding of how jazz should flow. She caused a sensation in 2012 with a Peggy Lee tribute. She has exactly the right voice and attitude for standards like Frank Loesser's "What Are You Doing New Year's Eve?" and for her own composition "When This Night is Over".

The darkest vocal colour comes from Sharon Dyall. Daughter of a Swedish mother and Guyanan father, she grew up in London and Barbados and brings gospel and blues to the party. She made her name in musicals (as well as work in overdubbing, as a TV actress and as a speech teacher). Just watch the stage light up as she comes on to sing songs like Bobby Troup's "I'd Like You For Christmas" or Jonas Knutsson's "Come One, Come All".

And of course one must not forget our Master of Ceremonies himself, Nils Landgren. He doesn’t only make the trombone sing, he also has that unmistakable, throaty yet bright soul voice. He sets the Christmas cavalcade in motion with the opening piece "Christmas Is", on which he welcomes all of the others to join in.

"Christmas With My Friends VI" is a celebration, and everyone who enjoys exceptionally good Christmas songs from Bach to ABBA in new and characterful interpretations is most welcome to it. It is the perfect accompaniment for all situations and moods, and is to be enjoyed before, during and after the day itself. Everyone involved in it has been a part of this joyous Christmas music-making for a long time now  –  while the number of listeners feel who love to be part of it has kept on growing too. For all of these friends may it be a peaceful and very merry Christmas!