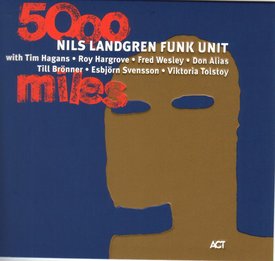 "Nils Landgren is one good reason for a jazz-funk renaissance." says John Fordham in London´s GUARDIAN about "live" in Montreux (ACT 9265-2). Now virtuoso trombonist Mr. Redhorn - Landgren is surprising his audiences with jet another exhilarating example of jazz-funk reborn with a new album full of unexpected but always delightful und fresh sounds. For this album he surrounded his Funk Unit with some of the hippest players in the international jazz upperclass: Tim Hagans, Roy Hargrove, Till Brönner, Esbjörn Svensson, Viktoria Tolstoy, Don Alias und Fred Wesley.

Thad Jones grabbed at the chance. Because of his extroverted playing style, trumpeter Tim Hagans had been kicked out of Woody Herman´s band. A short time later Herman´s competition had Hagans under contract. Jones would always seek out exceptional young talent who could then prove themselves while playing next to the greats of the business. The tour was booked full and the public´s support was solid. Step by step the pieces of the puzzle came together. Hagans lived in Sweden during the beginning of the eighties, and occasionally jammed with Nils Landgren. Jones worked a lot in Copenhagen, and his trumpeter told him about the talented trombonist. When it came time to set up a new horn section for a tour of Italy in 1981, Landgren got the call. Landgren, who had just turned 25 and was continuing to climb up through the Scandinavian jazz and studio scene, now had the job as lead-trombonist in one of the premiere big bands of its time.

Just as with Hagans, there´s a little story that goes with each of the illustrious guests on 5000 Miles. Don Alias had met Landgren in Salzau, where they found themselves together on stage and immediately connected. Roy Hargrove also met him at the Jazz Baltica Festival, where they jammed together into the early morning hours . Fred Wesley belongs to Landgren´s musical house gods. After all, the energetic trombonist and his expressive tones have embellished a whole musical era from Count Basie to George Clinton. For his part, Till Brönner could already be heard on Paint It Blue and Victoria Tolstoy had been accompanied on tour and on CD by the Esbjörn Svensson Trio. So, they´re all old friends who add their artistic bits to contribute to the success of 5000 Miles.

The secret of Landgren´s succinct ensemble sound is the relaxed atmosphere in conjunction with players on the same wave length. Funk lives from joy, spontaneity, and a pinch of cockiness, which re-emerge in the music as intensity, a fascination for structure, and groove. There, where the jazz player presses towards ever newer variations and ever more abstract realms, the soul man is grounded in rhythm, directness, and feeling. The uniting of the two musical worlds and the personal stylistic preferences of those involved are a part of the reason for the high artistic level of arrangements and integrated inspiration, coolness and discipline, feeling and reduction which are all brought together. Landgren is able to forge these links because he is at home in so many different stylistic camps. With his superior playing technique and aesthetic autonomy, he can reach back to a foundation that extends from classic training, studio experience in the pop world, and raucous live events, through chamber-jazz meditations.

The wide range of individual expression carries over into his Funk Unit, whose group sound has matured over a period of almost twenty years into an incredibly heterogeneous complexity. Since the first musical attempts in 1981, and the major successes of Live In Stockholm (ACT 9223-2) and Paint It Blue (ACT 9243-2), Scandinavia´s crispest, earthiest soul jazz combo has developed into an international super group which is ecstatically celebrated from Montreux to Canada. Made between March 1998 and July 1999 in Stockholm´s Atlantis studio, 5000 Miles (ACT 9271-2) continues in the past musical directions, adding impetuous, wild, undiluted, delicate, tender moments. From the hypnotically pulsing slow beat of the Björk´s Venus as a Boy through the slowly building trance structure of the title piece, to the happily grooving DA Fonk, 5000 Miles takes stock of the possibilities of interpretation within the tension between black tradition and white reflection. Neither cultural group tries to overtrump the other, however; the symbiosis stems from their mutual respect for the musical achievements of their partners. And so Nils Landgren´s Funk Unit sounds more real, authentic, and compact than ever: a sharp sound synopsis for the coming musical millennium, and a view of the creative perspective of a band that has begun to recognize their immense opportunities.