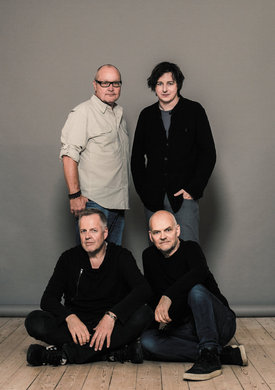 It scarcely feels necessary to mention the pre-eminent status of all four of these artists, because that is evident from hearing the music. When Nils Landgren brings such feeling to his own melody “Le chat sur le toit”, or when Michael Wollny dazzles with the blues-infused piano solo in “Lady Madonna”; when “Polygon” opens with a bass intro from Lars Danielsson, or when Wolfgang Haffner sets up the power groove to propel “4WD”, then it’s clear what’s happening: four leading figures in European jazz who know each other well and who have appreciated each other’s work for many years have now got together. True, their paths have crossed many times before, and in all kinds of configurations. The formidable duo of Landgren and Wollny comes to mind, for example, as does Haffner’s long-term role as an anchor in the Funk Unit, or Danielsson's vivid bass presence in Haffner's trio…but here for the very first time are the four friends as a quartet. They decided to record an album together at the Nilento Studio in Gothenburg: “4 Wheel Drive”.

The title of the album reflects the equal role which each of the four musicians has had in setting the direction for the quartet. They take to the road together, both as superb soloists and as team players. In addition to one original composition from each of them, Landgren, Wollny, Danielsson and Haffner also decided that they would focus on four living creative forces from the recent history of music and interpret their tunes, Paul McCartney, Billy Joel, Phil Collins and Sting.

"These tunes are timeless classics in their own right, but there was another idea behind the choices of the songs we’ve covered. They have strong associations with the instruments in our quartet," explains Wollny. So McCartney stands for bass, and for vocals. Singer Billy Joel is also a talented pianist, and Phil Collins first started off his career as the drummer in Genesis. The choices were also dictated by highly personal connections. Danielsson considers the Beatles musician as his favourite bass-player; McCartney is up there with Johann Sebastian Bach as the musician he reveres the most. Sting is an inescapable presence in Nils Landgren's repertoire, especially the trombonist’s interpretations of "Fragile". And finally Haffner, just like Phil Collins, feels completely at home as a drummer in both pop and jazz.

The 4 Wheel Drive musicians have also used the classic songs they have chosen as starting-points for their own excursions; so McCartney’s “Maybe I’m Amazed” becomes a subtly-lit jazz ballad. Freed from everything extraneous, and transformed by Wollny’s prepared piano, Billy Joel’s “She’s Always A Woman” is a mysterious and enraptured love song. The musicians interpret Genesis’ song “That’s All” as a collage of instrumental sound. And for Sting’s song about letting go, “If You Love Somebody Set Them Free”, they find a fitting musical parallel: the freedom of jazz leads naturally to Landgren’s powerful trombone improvisation. The album is bookended with music from the fast lane: it opens with Wollny’s fast-paced showpiece “Polygon”, and closes with Danielsson’s “4WD”; he had Nirvana’s “Smells Like Teen Spirit” in mind when he wrote this title track.

4 Wheel Drive as an ensemble is like a high-performance four-cylinder engine with all the gears meshing perfectly. And the fuel: jazz.