We are Family – Celebrating 30 ACT Years 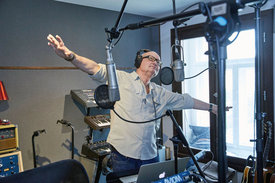 Recorded by Thomas Schöttl at Jazzanova Studio, Berlin on June 7 - 9, 2022, assisted by José Victor Torell – except as otherwise indicated
Mixed and mastered by Klaus Scheuermann

Nils Landgren has been and remains the absolute linchpin of the ACT family. To date, the Swede has made forty albums on the label as leader, plus another twenty as producer or soloist. Michael Wollny, whose many many projects with Landgren give him a special connection, sums up a key element in his success: “With Nils everything becomes easy.” There is indeed a particular ease about Mr. Red Horn’s way of being; it is infectious and runs through everything he does. Which is all the more remarkable when one considers the sheer number of roles he takes on: trombonist, singer, bandleader, producer, festival director, professor, curator, talent scout and mentor.

All of Landgren’s multiple roles and traits come to the fore on “3 Generations”. Working alongside producer and ACT founder Siggi Loch, Nils Landgren brings together three generations of ACT artists’ in various line-ups to mark the label’s 30th anniversary. Landgren and Loch have a friendship and habits of working well together which go back almost as long as the existence of ACT itself. The two met for the first time at the 1994 Jazz Baltica Festival, just two years after the label was founded. Landgren became an exclusive ACT artist shortly thereafter. Since that time, it has been through Landgren’s network that artists such as Esbjörn Svensson, Rigmor Gustafsson, Viktoria Tolstoy, Ida Sand, Wolfgang Haffner and many more have joined the label. Nils Landgren continues in his trusted role as ACT’s leading connector and integrator.

Finding and nurturing young talent has always been one of ACT’s strong suits. It was true for Nils Landgren, then later for Michael Wollny who joined the label in 2005 and is today one of the most significant pianists in Europe. With artists such as Johanna Summer and Jakob Manz - both born many years after ACT was founded - the label looks to the future with its younger generation of musicians bringing new energy and impetus to the world of jazz.

The Times (UK) has written: “Since 1992, ACT has been building its own European union of musicians, fostering a freedom of movement between nationalities and genres, and has given us an authentic impression of what the continent is about.” “3 Generations” demonstrates quite how true that assertion is. Around forty artists from the ACT Family make this anniversary album a celebration of the breadth, openness and inclusive power of jazz. The core of the album consists of recordings made at a summer 2022 studio session lasting several days. In reality, it is only Nils Landgren and Siggi Loch who could have brought this panorama of musical Europe into being. The influences here range from jazz, popular song and folk to classical and contemporary music, and much more.

Thirty tracks from three generations of musicians marking thirty years of ACT, with Nils Landgren as driving force. Not just a retrospective, but above all an insight into the present and future of the discovery label “in the Spirit of Jazz”.