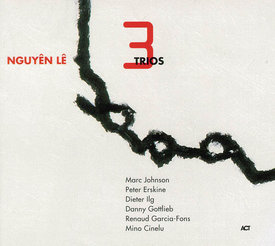 Since "Tales From Viêt-Nam" at the latest, the name Nguyên Lê belongs to the fixed stars of the modern guitar heaven. Since being startled last year however by that album’s sensational symbiosis of American Jazz, European Rock and Asian Folklore, the public and critics alike are preoccupied with one collective question: what follows thereafter? A full orchestral work maybe, an opera, or maybe even the complete estrangement from the usual genre in favour of rediscovered roots?

Not at all! Concern over the possible desertion of the all-around guitar-hero in the electric field between Wes Montgomery and Jimi Hendrix is completely unfounded. In fact, with his now fifth headlining CD the shooting-star who lives in Paris moves more intensively than ever along the curving path of modern Fusion-Jazz. Nguyên Lê’s chosen vehicle for this however belongs more to the category "classical": the trio. This stands for minimalism, improvisation and concentration. It guarantees the musicians absolute parity, but also demands unconditional respect of each other.

As the album title already suggests, the 38 year old autodidact lets himself slide into no less than three completely opposite electric fields. "Three trios, three structures, three concepts of time. Such comparisons only work in a smaller context. ‘Tales From Viêt-Nam’ was meant to introduce Nguyên Lê the composer, ‘3 Trios’ however the open musician, who is prepared to go in any direction."

Working with different line-ups in a relatively short period of time (October/November 1996) was the very thing that inspired Nguyên to a suite with their own names and the division into various areas. The term "suite" is to be understood more in a dramaturgic sense, rather than a stately-dramatic one. "At first, we simply played. It was only when mixing that I heard the very special and unique sound of each group and thought of the similes."

SILK
"Valuable, delicate and yet incredibly strong; properties which simply distinguish silk. In 1989, Peter and Marc formed the rhythm section on my first CD ‘Miracles’ (Musidisc), which Art Lande on piano also participated on. Both of them helped me greatly to realize my abilities, especially when I was still very inexperienced. As a guest soloist of the WDR-Bigband, Peter recommended me for Vince Mendoza’s ‘Jazzpaña’ concert in 1993. The interplay with them demanded maximum attentiveness. If you lose yourself for only a second, everything breaks down."

SILVER
"Spark-flying electricity, unrestrained and graceful flashes of lightning. My first trio. While working with Danny and Dieter on ‘Million Waves’, my debut for ACT, I experienced what blind understanding means. We were on tour a lot, understood one another really well and could begin to burn from one moment to the next. Even with all the fire, this trio however offers a great many subtle moments. For instance on ‘Woof’ which has the same melody as ‘Foow’ from the sessions with Renaud and Mino."

"Desert sand in which musicians’ dreams drift away. A trio of a completely different nature. Partially acoustic and lost in thought. Renaud with his unbelievably beautiful arco-playing and Mino with his colourful percussions bring out the ethnic side in me. Take the title ‘Idoma’, that is the name of a Nigerian tribe. Some of their masks show faces with slit eyes and white skin. Strictly speaking they look like Asians, but apparently they have nothing in common. Nevertheless the song sounds very Asian, although it is based on a pygmy melody."

For Nguyên Lê this present album is a further, incredibly important rung on his steep career ladder. At the age of 15, he took his first musical steps on the drums, then dedicated himself to the intensive study of guitar and electric bass beside art and philosophy. Subsequently he joined the French National Jazz Orchestra in 1987 and quickly became an established figure in France. During his performance experiences with musicians like Johnny Griffin, Louis Sclavis, Didier Lockwood, Carla Bley, Steve Swallow, Randy Brecker, Toots Thielemans, Courtney Pine, Steve Lacy, Dee Dee Bridgewater, Gil Evans, Quincy Jones, Trilok Gurtu, John McLaughlin, Dewey Redman or Ornette Coleman the multi-talented Nguyên must have already foreseen that summit assaults can only be accomplished successfully and without painful downfalls within a cohesive team.

After "3 Trios" Nguyên now knows: "The basis for the realization of all my musical ideals is friendship. I would never have accomplished anything like that with someone I don’t like."