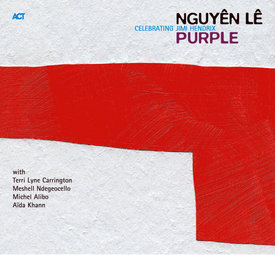 „For me, every note of Hendrix’s music is on fire. It might seem a little corny if I say that everything he played sounded like he was playing it for the last time. But it’s exactly this direct, urgent emotion that grabbed me from the beginning.“ (Nguyên Lê)

Jimi Hendrix was a god. At least for the pubescent rock music, Hendrix, with his overwhelming presence, exorcised the acne-pocked innocence of youth. When he set his guitar on fire at the 1967 Monterey Pop Festival, the normally peace-loving hippies celebrated in the face of the revolution. Two years later, at Woodstock, he took America’s national anthem, The Star Spangled Banner, and tore it into acoustic pieces. As the Etablishment’s bogeyman, the time was ripe for his likeness to be printed on T-shirts and plastered on wall posters.

Hendrix is a pop culture icon. But he is also regarded as one of the most creative musicians on the threshold between between rock and jazz. His irreverent way of dealing with technique and his joy in experimentation is still fascinating decades after his death. Hendrix is a model for the unconventional in creative art, and for this reason he is one of the artistic progenitors of guitarist Nguyên Lê.

"It’s an old story. I already had a group in 1993 in France with whom I played Hendrix’s music. The idea was to handle the whole thing somewhat like standards, giving the melodies, which I worship, my own voice. The band consisted of singer Corin Curschellas, drummer Steve Argüellas and bassist Richard Bona, who was still living in France at that time. We played together for three years. It was just fun, without any idea of making a record at some point." Lê enjoyed rock music and the spin-offs that he could weave out of it. However, his career as jazz musician began with other projects. The son of Vietnamese immigrants, Lê was born in Paris in 1959. He was at first involved with the fine arts and philosophy. He is self-tought on guitar, but made the spring into the Orchestre National de jazz in 1987, and came out of that elite school for creative music with numerous ideas for new groups. Lê involved himself with his own roots (Tales From Viêt-nam, ACT 9225-2), the world music cosmos out of Paris (Maghreb & Friends, ACT 9261-2), and tested out different trio combinations (Three Trios, ACT 9245-2; Million Waves, ACT 9221-2; Bakida, ACT 9275-2), until after almost a decade he has once again landed upon the idea of Hendrix.

"I wanted to take a look at the music on another level, from the perspective of jazz, but also, for instance, in a piece that I could envision women singing, or develop into ethnic versions of the songs. The arrangements should always have a relationship to the original at one or more points, but otherwise, they should stand on their own. For instance, that’s how "Voodoo Child", which its appeal to trance and magic, evolved. Through Karim Ziad I had the connection to Gnawa music from the Maghreb region of North Africa. The music has a repetitive ritualistic foundation with elements of rapture and ecstasy similar to Voodoo. It’s music through which you can be projected into another dimension, be another being with a different voice and identity." For this CD Lê looked for compositions that he could personally relate to, pieces that could be approached from different angles. Lê defines his musical position immediately at the beginning of the CD with "1983", a mixture of free, noise, and simple melody. "Manic Depression" is one of the few Hendrix pieces in ¾ time. Lê transforms it into an African feel over a modified 12/8 time with a characteristic meandering song form and text translated into Malian Bambara. "Up From The Skies" should sound Californian-smooth on the surface. At the same time it is one of Hendrix’s jazziest compositions, and is completely re-harmonized for this arrangement. "Purple Haze" plays with the funk idom, works like dance music, but remains irritating, since ist 15/8 time is missing a beat for that even feeling.

"Most of the time my projects have a ethnological music background. For instance, with the Vietnamese stories it was important to get the co-operation of living artists from the region such as singer Huong Thanh. In the case of Hendrix I was working with a part of Afro-American culture.

Terri Lyne was the most important counterpart in the sense that she is a symbol of that world. She has the neccessary jazz background and a close relationship to Hendrix’s songs. And she not only plays fantastically, she sings from her inside-out as a woman, and for me this was an important added dimension." Alongside drummer Terri Lyne Carrington, bassist Michel Alibo expanded the core trio, which then recorded all the tracks. Everything else was added later, according to the tonal colouring needed. There is Corin Curschellas, the white voice with its characteristic theatrical style, and Aïda Khann, her African counterpart, with a stylistic spectrum ranging from soul to Mali. The pianist Bojan Zulficarpasic brings the East European, and percussionist Karim Ziad the North African elements into play. And finally, Me’Shell Ndege Ocello appears as special guest from New York to add her funky-soul bass tone to the overall sound structure. And so Nguyên Lê assembles his Hendrix hommage as multi-faceted culture-puzzle in a way that both the original meaning of the compositions and the contemporary sound images of today would be given full justice. Purple is a bow to genius, without kowtowing.