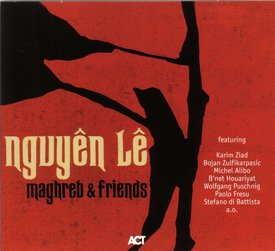 Two of the most overworked words in contemporary jazz criticism are "fusion" and "soundscape". The former is routinely applied to any music incorporating elements from ostensibly discrete stylistic or cultural traditions, the latter to music in which the overall aural effect is thought to be as important as its individual constituents; each can serve to mask critical confusion on being presented with a hodgepodge, an arbitrary mix of sounds and textures gathered magpie-fashion, more for their superficial attractiveness than from any deep conviction that they will form an indispensable part of a satisfying artistic whole.

Nguyên Lê’s music in general - and Maghreb & Friends in particular - irresistibly brings both words to mind, but its richness, originality and sheer integrity ensure that each can be used in its most complimentary sense. The album’s opening track, "Ifrikyia", makes the point straight away. B’net Houariyat, whose vocal and percussion contributions recall the spontaneity and passion of qawwali parties, the African flute of Aly Wagué and the shimmering kora of Jaques Avenel, the funky electric bass of Michel Alibo and the sinuous soprano saxophone of Alain Debiossat, all interact closely with the soaring fluency of Lê’s guitar, directly inspiring, rather than providing an unusual backdrop for, his music.

Lê, born in Paris in 1959 to Vietnamese parents, has always welcomed the artistic possibilities springing from the juxtaposition of cultures characterising contemporary urban living: "My parents would listen to traditional Vietnamese music, Western classical music and a little jazz. My first relation to music - like all the kids my age - was through Deep Purple and rock, but then I listened to fusion, bebop and so on." His rock and jazz enthusiasms have borne fruit both in Lê’s sideman projects - under Antoine Hervé with the French National Jazz Orchestra, Vince Mendoza with the WDR big band, Bob Brookmeyer in his New Yorker suite - and his own music, which - particularly on his 1995 album Million Waves - combines the visceral power-trio punch of Jimi Hendrix with the improvisational spirit of the great jazz masters.

It is the heterogeneous cultural richness of Paris, though, rather than purely stylistic eclecticism, that has informed Lê’s most recent projects. His 1996 album Tales from Viêt-Nam  was a characteristically multi-faceted work, drawing as heavily on the jazz-based talents of the likes of Italian trumpeter Paolo Fresu and UK-born Paris-resident drummer Steve Argüelles as on traditional Vietnamese elements; Maghreb and Friends, similarly, reflects Lê’s openness to the sounds everywhere around him in his native city: "In Paris, like in New York, you have lots of ethnic communities, but they don’t mix so much in New York; in Paris, I’m deep into African music, and I’ve always found the relationship between black African styles and the North African - Algerian and Moroccan - musics, very interesting."

This interest has had spectacular results on Maghreb and Friends. To the garrulous intensity of rai, and the unadorned purity of West African traditional music, Lê has brought both the calm, considered eye of the arranger and the quicksilver, on-the-spot adaptability of the born improviser, creating a soundscape at once startlingly original yet wholly natural-sounding. "Funkraï", for instance, is exactly that: a thoroughly beguiling blend of both its titular forms in which Miles Davis-like muted trumpet its easily alongside the chattering percussion of Mohamed Menni; "Guinia" unaffectedly mixes the diaphanous delicacy of kora and African flute with the jazz urgency of Stefano di Battista’s alto and Bojan Zulfikarpasic’s piano.

The production of artistic unity from extraordinary diversity has been one of the hallmarks of Nguyên Lê’s music over the years, but his success in this field should not be allowed to obscure his art’s most immediately appealing feature: he is, simply, a superb guitarist,  entitled to take his place alongside such contemporary luminaries as Bill Frisell, John McLaughlin and John Scofield, and a worthy successor to a man whose technical innovations and apparently limitless musical imagination are still in the process of being assimilated thirty years after his death: Jimi Hendrix.