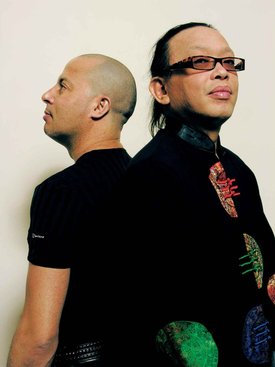 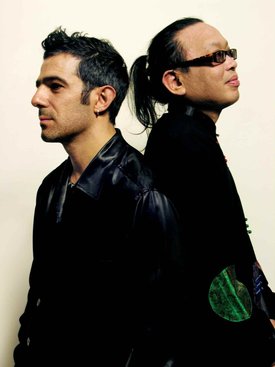 A laboratory in the living room

Even in the adventurous territory of jazz, this French-Vietnamese musician stands out as a unique explorer of sounds. His new CD will surprise even those who believe themselves to be, by now, familiar with the diversity of his musical output. The first unusual fact: Most of the tracks were recorded in Lê’s living room (pardon me, his salon), and also completed à la maison using his computer. The second unusual fact: This domestic method of producing music need not conjure up the cosy, well worn realm of familial comfort, in fact Nguyên Lê leads the listener into a space that is full to the brim with warped sounds and acoustical metamorphoses. The windows of this space are open to influences from very different parts of the world. The, as Lê puts it, "Sardinian breeze, the hypnotic influence of the orient, and the mystery of Asia" broadens into an ever more fascinating sonic magnificence. And all of this is home grown and finely honed.

Nguyên Lê’s alternating partners for this album are the Sardinian trumpeter Paolu Fresu and the Tunisian oud player Dhafer Youssef. The guitarist’s connection with Fresu goes back more than ten years, he had admired him the first time he heard him. Lê met Dhafer Youssef six years ago during evenings with world music, jazz and rock at Vienna’s "Porgy and Bess" jazz club, and he "knew instantly that this was someone with a special intensity. Today Youssef lives in his neighbourhood Barbès, a virile melting pot in the north of Paris. One might be tempted to call this recording "Two Duos" alluding to Lê’s album "Three Trios" (ACT 9245-2). But the artistic process didn’t end with the playing. Nguyên Lê has processed these recordings electronically to "concentrate them". Duos that have undergone a metamorphosis. Musical dialogues in an electronic laboratory.

The idea did not spring from nothing. In Paris, Nguyên Lê says, electronic sounds are more en vogue than any other kind of music. No stage looks complete without a laptop and DJ. All the clubs feature the combination of dance and experimental sound. "I usually don’t trust fashion", he says, but this surge of electronic music has not left him unaffected. Last year he was confronted with electronic music while writing a film score, for which he was asked to use elements of noise and electro-acoustic experimentation, the "abstract side of musical material". This inspired him to dig deeper into the sonic fabric of music. This experience also made him think about producing an album from his home. "I simply wanted to develop everything that is possible at home. I wanted the duos to retain their intimacy, while giving them an added orchestral dimension by allowing the spirit of the machine to influence them. This is a radical process: The most intimate form of jazz playing, the duo, is stripped of its immediacy. Yet it still sounds intimate and warm. And this is the essential paradox that Nguyên Lê so ingeniously brings to life here.

Lê’s approach to each duo differed depending on his partner. With Paolu Fresu he essentially had a totally open conception: Improvisation with no composed material. Although there are exceptions: Billy Strayhorn’s "Chelsea Bridge" to name one that developed into an intimate gem featuring muted trumpet and gentle electric guitar. Nguyên and Dhafer collaborated on the music for their duo, or adapted compositions of Youssef’s, lending them a new structure through the process of improvisation. One track might be characterized by Youssef’s unique expressive wail and an electric guitar contributing a rock-and-roll energy, while another celebrates the archaic sound of oud and guitar in sensually intertwining improvisation. In the duos with Fresu soft muted sounds of the wind instrument meet strange, electronically filtered gongs and Asian melody. Or numerous trumpet voices split an electronic noise-scape. "Neon" is the name of this track, and it is surprising to learn that the rhythm track was added later underneath the string instruments and trumpet, as if it had been present all along as an intuited rhythm.

Everything integrates organically on this CD. The music sounds as if the electronic processing had been sensed all along during the playing, as an anticipated electronic intensification. It never seems out of place. Nguyên Lê’s “chamber” music has a compelling inner logic - and convincing internal vigour.