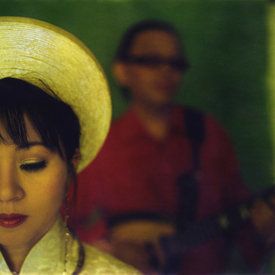 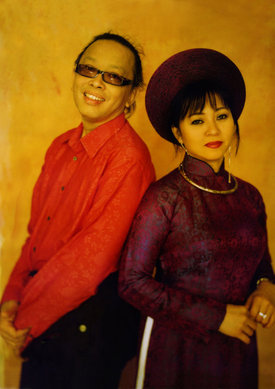 Drifting flowers over the water, wandering clouds in the wind. Deep in the night she awaits for her love. These themes, often found in Vietnamese poetry, are buddhist-inspired images of the world’s impermanence, of the fragility of our existence. Ephemeral yet always renewed. Thus the Vietnamese musical tradition is transfigured in Fragile Beauty by unexpected encounters (jazz harmonies, African rhythms, Japanese vividness), by new orchestration of ancient instruments (koto, trung or luth) and a true dimension of improvisation and interplay.

Far from being a matter of personal preference or utopian ideology, the global citizen is a fact of 21st century city life. Wandering through the streets of any big metropolis in the world, it becomes immediately apparent that the so-called “global village” is a reality, not just a catchphrase. The consequential convergence and blending of cultures has for a long time been the main artistic subject for singer Huong Thanh and guitarist Nguyên Lê. Both are of Vietnamese origin, both have been living in Paris for a long time, and both of them live their, as Lê once put it, “identity as children of the diaspora” in a fusion of western and far-eastern culture.

Fragile Beauty is Huong Thanh’s fourth album under her name on ACT following Moon and Wind (ACT 9269-2), Dragonfly (ACT 9293-2) and Mangustao (ACT 9423-2), all of which feature Nguyên Lê as producer, co-composer, arranger and accompanist on the guitar. As before, the name of the album speaks eloquently of the music. The steady flow of life, its ephemeral nature and fragility are central themes of Buddhist culture. Vietnamese poetry has found a multitude of images to describe this: flowers drifting on water, or the passage of the clouds or the swallows. The team Thanh/Lê draw their inspiration from this rich heritage of images and motifs. Their repertoire ranges from an excerpt from the noble 10th century national epic “The Pavilion of Crystallized Azure” through the modern impressionist “Drifting on the Water” to sometimes melancholy, sometimes happy work songs.

Huong Thanh is a daughter of one of the most famous singers of the new Vietnamese theatre (Cai Luong). Her crystal-clear voice with its strange, yet enthralling quality that uses the syllables, melodies and scales of Vietnamese music, represents the traditional element on this album. Yet her singing remains open to the musical transformations brought to the music by Lê’s Hendrix-legacy, his jazz-innovations and his avant-garde electric playing. European musical tradition forms a kind of connective fabric in this context, given a Mediterranean colour by Paolo Fresu’s gentle trumpet playing and the singing double bass of Renaud Garcia-Fons or a jazz flavour by Dominique Borker’s piano harmonies. Yet a vital factor contributing to the recording’s textural richness is the multitude of string- and percussion instruments from all around the world used on the album: the Vietnamese 16 string zither (dàn tranh) and bamboo balafon play their part as do the African Udu, talking drums, congas and cajon. A further new colour is provided by Mieko Miyazaki, the internationally celebrated young master of the 8th century traditional Japanese instrument the koto. And of course Lê himself subtly yet pointedly utilizes his electronic arsenal of radiator, synthesizers and samplers. “One of the main ideas was to give the Asian instruments a different colour by connecting them to different traditions. Africa has inspired me since my work on ‘Ultramarine’”, says Lê.

African rhythms, Japanese liveliness combined with western melodies and jazz harmony all become part of an exciting venture, the basis and destination of which remains recognizably Vietnamese. A venture, which leads to a fusion of past and present, that points directly to the future.