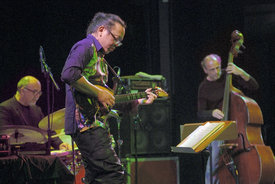 Our paths have crisscrossed and overlapped like crazy these past years. The plain fact of the matter is that we love to play together.

This Trio brings out the best in us, from subtle whispers to wild electricity, lyrical songs to complex rhythm games. To this wide dynamic we wished to invite the great Stéphane Guillaume on saxophone, thus opening the band up to new soundscapes and fields of interplay.

The recording came at the end of a great tour, and the session was one of the smoothest we ever had: relaxed, focused and fast - as it should always be. Welcome to our Dream Flight.

Peter, Nguyên & Michel
**************************************************************************************************************
Almost eight years ago ACT recorded a transcontinental trio whose members combined the different colours and traditions of their individual musical backgrounds within a seldom-heard level of freedom and equality. They didn’t name the trio; instead they used their initials: out of Peter Erskine, Nguyên Lê, and Michel Benita E_L_B was born. Their first CD, E_L_B (ACT 9289-2), was released in 2001; the results were thrilling, forceful, yes – astounding. There would have been no question of quickly getting together for a second CD if it hadn’t been first for Nguyên Lê’s serious illness and then the conflicting commitments of the musicians. And so it took until now for three of the most interesting musicians in the world of jazz to get together again. But it doesn’t necessarily do any damage to allow something to ripen over time. At any rate, with the new project, Dream Flight, you can reckon that the three came to this project brimming with anticipation.

Ever since his discovery by big band revolutionary Stan Kenton, 54 year old drummer and percussionist Peter Erskine has been acclaimed as one of the most distinctive and at the same time stylistically open drummers in jazz. In the jazz-rock era he achieved what could be called “superstar” notoriety with the legendary band “Weather Report”. Yet already by the early ‘80’s he was showing a sensitivity and economy of playing with such heterogeneous stars as Maynard Ferguson, Pat Metheny, John Abercrombie, and singer/songwriter Joni Mitchell.

Michel Benita is the same age as Erskine. He was born and grew up in Algeria. With his move to Paris in 1981 he quickly became – among others with Orchestra National de Jazz – one of the greats of the French and European scene. There is scarcely a French or Italian jazz musician of note that he hasn’t worked with, either as sideman, or in his own bands. And such American musicians as Lee Konitz, Archie Shepp, and Billy Hart trust his warm, exceptionally flexible tone.

49 year old guitarist Nguyên Lê was born in Paris of Vietnamese parents. He is one of the key figures of the European jazz scene and founders of the early world music movement. One can see how wide his horizon is by his evenly-weighted admiration of music from his Vietnamese homeland through to the great jazz guitarists, and rock musicians like Jimi Hendrix. He has developed an unmistakeable style that combines the traditions of virtually every continent. As accompanist, producer, friend, and patron of such diverse musicians as Michel Portal, Kenny Wheeler, Paolo Fresu, Renaud Garcia-Fons, Huong Thanh, Terri Lyne Carrington, Chris Potter, and Paul McCandless, to name a few, he has created a unique oeuvre that has been documented on eleven ACT CDs up to this point.

This is the story of a long, and now with Dream Flight, deepening friendship: in 1993 Lê was recommended to ACT chief Siggi Loch by none other than Peter Erskine, with whom Lê had already been involved in a wide variety of projects. Erskine was also the one who set up Lê‘s working with American composer-arranger Vince Mendoza. Mendoza has been a regular guest with the WDR radio big band; this collaboration resulted in the production of “Jazzpaña” and “Sketches”, on which Lê is featured. Commenting on Nguyên Lê’s German premiere in 1993, Ulrich Olshausen wrote in the FAZ newspaper “He plays guitar like no one else”.

Dream Flight is not only a long-awaited reunion of old friends; on the opening and title track a fourth commanding force jumps in to the fray – the saxophonist Stéphane Guillaume. He enriches this charismatic trio with silken soprano saxophone lines that will bring you to your knees, wild, virtuoso bebop-like tenor passages, and impressively supportive accompaniments.

Together they take flight into a fantastically varied musical dream-world. It is a world of such lyrical ballads as Erskine’s “Song for Jaco” (written for Erskine’s former musical compatriot, the late Jaco Pastorius), or Lê’s gossamer “Romanichel” with its use of Far Eastern scales. There is the drive of Erskine’s audacious, undulating “Plan 9” (one might add, “from outer space”), and Lê’s “Kokopanitsa” played in his unique rock style as he finesses in shimmering Asiatic lines, up through Benita’s free jazz and bebop-instigated “Rotha & Prisca”. Strength paired with tenderness; clarity united with the cryptic; tradition combined with innovation – what you experience on this CD is one of modern jazz’ most luminous visions. Let’s hope we don’t have to wait another seven years before we might again enjoy such a dream flight.