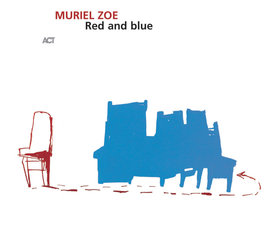 Muriel Zoe’s creativity springs from a rare skill in two fields: she has not just a great musical but also an artistic talent which developed early and which have fed off each other since then. Muriel Zoe is today a freelance musician and painter as well as a teacher of painting and graphic art in Hamburg.

Muriel Zoe was born in 1969 in Ludwigshafen. Part of her schooling was at an English boarding school in South India. Back in Germany, she began to play guitar at age 12 and wrote her first songs with English lyrics at 15.


In 1988 she began to train as painter and engraver at the art school in Nurtingen in the Southern region of Baden-Wurttemberg and continued her education from 1990 at the technical university for design in Hamburg. Since 1994 she has exhibited in both group and solo shows.


In 1990 she began studies in popular music at the Hamburg music conservatoire in the area of rock music and composition. 1992 saw her form her first band Zoe’s Echoes working on a repertoire of jazz standards. A further development was the foundation in 1995 of the band Zoe and the Zebras, where she was the  "surprise star" of the "Jazz In Hamburg" festival according to the Hamburger Morgenpost.

Together with her Hamburg musical friends Michael Leuschner (tp), Matthias Pogoda (g), Johannes Huth (b) and Michael Verhovec (dr) Muriel Zoe has been developing the material for her ACT debut album: Red And Blue is the very individual, most entertaining and without doubt a supreme analysis by a young singer of the classics of the jazz songbook – from "Bye Bye Blackbird" through "Round Midnight" to "Autumn Leaves" – enhanced by two of her own compostions – "Lovesong No.1" and "All The Way".