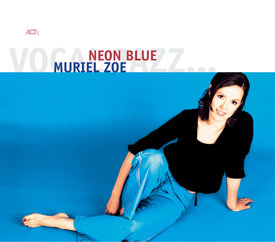 Muriel Zoe’s debut album on ACT Red and Blue (ACT 9416-2) caused quite a sensation throughout Germany when it was released one and a half years ago.  "A debut that reverberates throughout the land" wrote the Hamburger Morgenpost accurately summarising the reaction of press and public.  Another of Germany’s major daily newspapers, the WAZ, called the album "one of the most significant recent releases".

Muriel Zoe was born in 1969 in the German city of Ludwigshafen and spent a part of her education at an English boarding school in South India. Back in Germany, she began to play guitar at the age of 12 and wrote, when 15, her first original songs. Before she turned to music and formed her first band in 1992, she studied painting and graphic art, and makes her living today in Hamburg with two fully-fledged careers - as a freelance musician and as an artist.

Red and Blue focused primarily on jazz standards, which these days can mean a certain risk for a young singer. But the confidence of her expressive and highly-personal interpretations of the classics of the jazz catalogue beguiled. Effortlessly she was "able to take songs interpreted a thousand times before and make them into individual, transparently-acoustic musical pearls." (Jazzthing)

There are also standards on the new album Neon Blue - released as part of the Vocal Jazz series on ACT. But this time the mix is much more colourful. For example you can find Cole Porter’s ‘It’s Alright With Me" as  a gorgeous opener alongside two Beatles songs, country hit ‘Ring Of Fire’ by Johnny Cash, or Michael v. Dyke’s ‘Everybody Wants To Be Alone Sometimes’, realised in conjunction with the well-known producer and engineer BlackPete.

In addition there are Muriel Zoe’s originals, which understandably have a major role in this album: "I wanted to bring my roots as a singer/songwriter to the foreground in this album", she explains. Whereas Red and Blue  had just two originals, this time five of the 13 tracks are from her own hand. They confirm something that was already apparent from the first tasters on Red and Blue: that not only is Muriel Zoe a great interpreter of jazz, but also a very strong singer/songwriter.

"The title track, ‘Neon Blue’, is one of my most important compositions of recent years, and is based on the night-time view from my window of Hamburg’s Schanzenviertel", she says when describing her original songs. "’It Must Be Me’ is one of my newest songs, along with ‘Lullaby’ which is dedicated to my two-year-old daughter."


‘Future Song’ will be well known to her fans, having long been favoured by the band as the final song at her shows.  The lyrics are by the writer Dea Loher and were originally set to music for a performance at the Thalia Theatre in Hamburg of a theatre season called "Magazine of Luck".
"It was always going to be a challenge to achieve the right balance between original material and covers", she writes about the process of preparing the album. The result speaks for itself.  For all the diversity of the material, from her own songs to jazz standards, Muriel Zoe has achieved a coherent, homogeneous and authentic recording, clearly demonstrating her personality. Her way of stressing the characteristics of each piece, her assured feel for phrasing and sonic palette, and not least her warm voice make a unique stamp on Neon Blue.

The long-time members of her band – Johannes Huth (Bass) and Michael Verhovec (drums) who have produced the album with her, along with Matthias Pogoda (guitar, Wurlitzer) and Michael Leuschner (trumpet) – have built decisively on the success of the last album and this time the arrangements were again made jointly by the band during rehearsals. The clear high capability to create an identifiable band sound also stems from this fact. Thus Neon Blue has close links to Red and Blue, yet takes it several steps further.