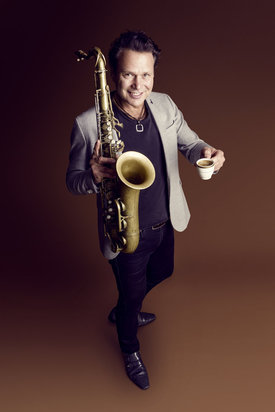 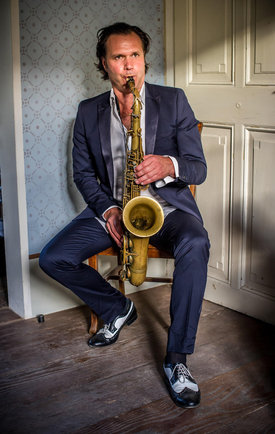 Recorded, mixed and mastered by Stefan Gienger
at Mastermix Studio, Munich, Nov. 2016 & May 2017

Many people who have never heard the name of Mulo Francel will nonetheless be aware of his playing, because the saxophonist is one of the founder members of Germany's most successful world music group Quadro Nuevo, which has been in existence since 1996. For Francel, this band provides the ideal means to channel any need he might have for travel, and also to give musical expression to his innate curiosity about other cultures. Quadro Nuevo brings him into contact with musicians, myths and melodies from all over the world, and these encounters happen “in the spirit of jazz”: freely, spontaneously and non-judgementally. That said, Francel’s musical roots are unquestionably in jazz. His legacy from a father who died too soon was a collection of jazz records, which became the door to a new world for the young Mulo. At the age of 16, he saved up his own money and bought a saxophone. His studies in Linz, Munich and New York prepared him for the wider world. Alongside his allegiance to Quadro Nuevo, he has always stayed true to jazz, from his early soul band Mind Games, through the trio Die Abenteurer (the adventurers), to a jazz quartet, with whom he recorded the album “Escape” five years ago. Most recently he has been part of Echoes of Swing, with Pete York, Shannon Barnett and Henning Gailing, who made a “Tribute to Bix Beiderbecke” in the “Jazz at Berlin Philharmonic” series, which was issued as a double CD on the ACT label.

“Mocca Swing” marks a return to that abiding first love – of jazz. And yet his debut album in his own name on ACT is much more than that. “It has been such a luxury. A wonderful escapade, I've been able to go the whole way.” says Francel. What has emerged is a double album which is a substantial piece of work. The first of the two CDs presents “Mulo Francel & Friends”, i.e. his new quartet. As in Quadro Nuevo, the combination of musicians with such different stylistic origins produces kaleidoscopic variety – and excitement. Francel himself sets the tone with his melodic playing, staying close to mainstream jazz, (on two tracks he plays the C-Melody saxophone, widely used in early jazz), but he also gives his excellent accompanists full rein: Baku-born pianist David Gazarov, who possesses an extraordinary technique – at the intersection of classical music and jazz – and who is a also walking encyclopedia of all jazz styles; bassist Sven Faller, known for his work with Le Bang Bang and Trio Elf – he studied in New York, and broadened out his horizons by playing on the scene there; and percussionist Robert Kainar, a pivotal figure on the Austrian jazz scene.

In addition to three compositions by Francel himself, his colleagues were also able to contribute: Faller’s “ Pixinguinha” pays homage to Brazilian music, and Gazarov’s adaptation of Chopins Etude Op. 10, No. 6 appears as “Retrospective Of A Broken Man”.

On the second CD, they are joined by the Munich Radio Orchestra and companions from various points in Francel’s musical life. “Our point of departure is the pieces I have felt closest to in recent years. The idea was to use all of the possibilities offered by a large ensemble to cast new light on them,” Francel explains. His colleagues from Quadro Nuevo, Andreas Hinterseher on bandoneon und accordion, Chris Gall at the piano, Evelyn Huber on harp, and D.D. Lowka on bass join him on three tracks. Compositions from the repertoire they have shared together, such as “Taquito Militar” – a tango which Francel discovered on a journey to Buenos Aires, and adapted – are transformed from chamber music into something orchestral and hymnic, but also jazzy. The same happens to “Flying Carpet”, the title track of a Quadro Nuevo album, which oscillates between western and eastern influences. This track grew out of the work – and a journey together to Egypt – which Francel and Quadro Nuevo did with the band Cairo Steps. Here percussionist Max Klaas from Cairo Steps ensures that the rhythms are authntic. Erroll Garner's “Misty”, which is one of Francel's favourite jazz standards, gains extravagant new colours through adding the Spanish guitar sounds of his good friends Jan Pascal and Alexander Kilian who form the flamenco duo Café del Mundo. And finally Francel takes compositions by friends such as the guitarist Paulo Morello (“Robert’s Waltz”) and the flautist Philipp Sterzer (“Die Abenteurer”/ the adventurers), and also uses experienced arrangers such as the New York-based latin specialist Daniel Freiberg, the young innovative big band writer Leonhard Kuhn from Munich, and the Dutch early jazz specialist Menno Daams.

“Mocca Swing” is a retrospective of the musical creativity of Mulo Francel. It documents his role as a passionate builder of bridges between young and old, one’s home country and abroad, and between jazz and other music genres. It is a thoroughly enjoyable counterweight to the kind of insidious music that we hear everywhere, which has been deprived not just of its secrets but also of its magic.

Above all, this album lives up to the promise of its title: it is hot, appealing and enlivening.