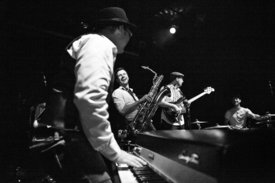 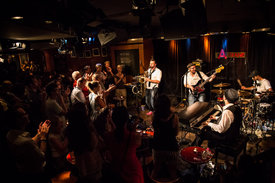 "The best thing I've ever heard! You've just gotta love their energy, the way they enjoy their music. Plus their team spirit, ability, playfulness...and their cojones. Thanks guys, just keep on doing what you do - live and on CD!"

Mo’ Blow receives this kind of praise from ecstatic fans from all over the world. Their brand of jazz-funk has even managed to locate the defrost button (who knew there was one?) of one of the most influential broadsheet newspaper culture supplements, that of the Munich-based Süddeutsche Zeitung, who wrote: "Party! These lads don't just get you going with conventional grooves, they grab you. More power to them!"

The four lads of Mo’ Blow have been on their "for those about to Funk" mission for a good decade now. They released their ACT Debut album - with that name - in 2011, and since then they have done well over a hundred gigs, and have travelled to over 20 countries. They have covered the terrain you'd expect, the clubs of Germany, Austria and Switzerland, they've stretched out into the Baltic countries. But they've also taken in Ukraine and Russia and then gone onwards to Malaysia and China. One appearance at the Jarasum Jazz Festival in Korea, with an audience of several thousands going wild stays in saxophonist Felix Falk's mind as something special: “What an amazing atmosphere. The fans went completely mad! Our Korea trip is right up there in Mo’ Blow’s best gigs ever.” This is an exceptional band which proves the point that instrumental jazz-funk really can completely energise a crowd and really get it going.

Felix Falk's distinctive skronk baritone sax hooks, Matti Klein's killer Rhodes, Tobias Fleischer's funktastic bass, and André Seidel's boss drumming... these guys have technique bordering on the scary, but also a ridiculous and infectious sense of fun. Their regular gigging has instilled in them an instinct for showmanship and stagecraft, plus a sixth sense of the right way to construct and to pace their shows.

Also right in there in the Mo’ Blow mix are the infectious joy they unfailingly communicate, and the capacity of the band members to get stuck into each other's musical ideas.

After three studio albums, the time had come for a Mo’ Blow live CD. The intimate space A-Trane Club in Berlin feels like their living room. It was a case of “mind the closing doors, please” - and off they went, straight into frenetic action with the track “Slingshot.” On this new album, Mo’ Blow take you on an hour's ride through their repertoire from the past ten years, culminating in a high-energy work-out on the title track of their most recent studio album, “Gimme the Boots.”

The word about Mo’ Blow had also travelled around the music scene, to judge by the illustrious guests who blew in to the A-Trane to join the party. There was Nils Landgren – who also produces their albums. It was his Funk Unit which set the whole European funk thing in motion a few years ago. With his red horn, he has continued to show that he knows exactly which buttons to push to turn up the heat of an audience. Violinist Adam Bałdych, another member of the ACT family, also joined in. He is a musician who in a very short time has managed to open up completely new dimensions for the violin, from crossover and in towards soul and funk. Two others also spun by to contribute some flavourful sounds: Franz Bauer on the vibraphone und Kacper Smoliński on harmonica.

Another party guest was Pat Appleton. This singer has been described as the mother of German funk jazz, having emerged as the lead singer of DePhazz, a bossa funk band incredibly popular in Germany at around the turn of the millenium. Her song “No Particular Way” fits into the programme perfectly. For the Mo' Blow-ers, this is the first ever contravention of their rule to be a purely instrumental band. In fact the quartet have made another exception to that rule for their old buddy Nils Landgren, who gets to sing a sensational and punchy version of Adele's “Rolling in the Deep.”

As Berliner Zeitung has described the Mo' Blow phenomenon: “With 'Live in Berlin, Mo’ Blow have once again fulfilled their promise, they are one of the hottest club bands around.”