Mo' Blow
For Those About To Funk 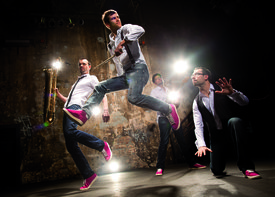 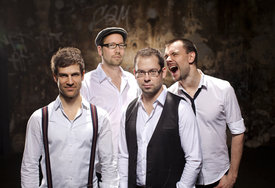 Germany is not exactly known as the home of soul and funk, but after you’ve heard Mo’Blow from Berlin you will think differently about the country where the ‘1’ and the ‘3’ are becoming more and more prominent. The quartet, which the ‘Berliner Zeitung’ described as one of the hottest club bands, has the groove in their blood. With For those about to Funk, their debut album on ACT, Mo’ Blow ticks all the boxes for the label’s Young German Jazz series: refreshingly new, exciting and unconventional, with that certain something and of an international calibre.

It was a stay abroad that gave birth to the band – Mo’ Blow’s mastermind and saxophonist Felix F. Falk studied in Liverpool in 2002. Not only did he get to know the spirit of the ‘Fab Four’ but was also infected by funk music, and while there he founded the original line-up of a band called ‘Sahnefunk’. After returning to Berlin in 2003 he recruited new members and together they renamed the band Mo’ Blow. With bass player Tobias Fleischer, who had also studied at Paul McCartney’s Institute For Performing Arts’, drummer André Seidel and pianist Matti Klein, the regular line-up was complete. Their musical spectrum was expanding more and more into jazz and soul, and the new formation quickly gained a reputation as a first-class live act. Their performance at the Berliner Jazz & Blues Award was so convincing that they were elected winners by both the jury and the audience.

On this basis it is no wonder that Nils Landgren, who together with his Funk Unit has been the benchmark artist for big grooves in Europe for decades, became interested when an old friend drew his attention to Mo’ Blow. After meeting the band, he soon decided not only to do a guest appearance on their next album, but also to produce it, and in November 2010 everything was ready for the recording at the P1 studio in East Berlin – Landgren says that he loved the funky atmosphere of the session. On two pieces, including a whole new version of Pat Martino’s Mac Tough with a wild wah-wah sound, Thorsten Goods demonstrated his skills on the guitar. Magnus Lindgren and Magnum Coltrane Price, both members of Landgren’s Funk Unit, arrived unexpectedly from a gig in Poland, and before catching their connection flight to Stockholm in the evening, Lindgren enriched two songs with the cool flow of his tenor saxophone and flute. Coltrane Price contributed the rap on Along Came Mag and thus in a way put Mo’ Blow’s musical credo into words. When listening to the result of this amazing session, it becomes clear that these young German jazz musicians can keep up with the funk elite in their own exciting way. Falk’s original saxophone hooks are outstanding, and together with Klein’s vibrant performance on the Rhodes piano, Fleischer’s full bass and Seidel’s precise drumming, the quartet simply burst with energy.

With a clear eye for detail and love of authenticity, Mo’ Blow spices up its unique sound of jazz, funk and groove. Fried Chocolate with its thrilling up-tempo, Volkman’s Van roughened by Nils Landgren’s trombone, Ricky The Lobster driven by the slap-bass of Tobias Fleischer; all the songs are emit an joyous sense of fun and make you want to move your feet. Eleven Feels Like Heaven and 75% In Love groove with a cool slow burn, Mo’bile, supported by Falk’s didgeridoo and Lindgren’s flute, sounds almost psychedelic, while Groomsman alternates between hard funk and soft soul.

Mo’ Blow puts jazz into motion, and For those about to Funk is a brilliant display of how energetic Young German Jazz can be.

Giving German jazz talents a fair chance against the international competition and the recognition they deserved, ACT launched the ‘Young German Jazz’ series in 2005. Its success so far speaks for itself; Jan Zehrfeld’s ‘Panzerballett’ has gained many fans both in and out of the usual jazz circles with their cool combination of jazz and heavy metal. The spectacular trumpeter Matthias Schriefl, the unique singer Michael Schiefel (with JazzIndeed), the inventive pianist Carsten Daerr and the fresh, sophisticated and mature sibling duo Julian and Roman Wasserfuhr are examples of these wild young artists, who rank among the best of their kind in the country. The series was a hit right from the start, as Michael Wollny and the trio [em] made their international breakthrough. Looking around in Germany, one can rest assured that further success stories are sure to follow: Bright prospects - Young German Jazz