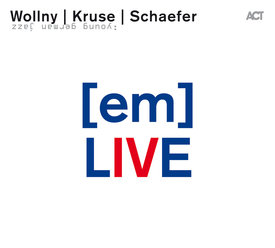 “Bands are like relationships,” says bassist Eva Kruse. “You have to go through the occasional crisis but, if you manage to stay together, you grow through it.” For bands, as for relationships, places also play an important role: the place where you got to know one another or the place where you grew up together. For Kruse’s trio, founded in 2002 under her name but which soon changed its name to [em] due to the equal role of Eric Schaefer on drums and Michael Wollny on piano, the JazzBaltica Festival in Salzau is just such an important place. It marks both the start and the culmination of their career to date: “[em] Live”, recorded as part of the 20th festival jubilee, is definitive evidence of the biggest success story in German jazz in recent years.

ACT boss Siggi Loch remembers being given a demo CD at the 2004 JazzBaltica Festival. Today he can’t quite remember whether it was Kruse or the sound engineer for e.s.t., Ake Linton, who gave it to him. In any case, Loch had a CD of unknown origin in his hands which simply had “Trio [em]” written on it and this stirred a great interest in him. Later on, whilst on a radio programme, Loch received the same CD from Michael Wollny and knew immediately who was involved and he signed up Kruse, Wollny and Schaefer straightaway. The recording he had been given was released, without any changes, under the title “Call it [em]” (ACT 9650-2), which in 2005 launched a rapid rise to fame, the like of which was unprecedented in Germany. The positive critics came rolling in: “Wollny, Kruse and Schaefer save German jazz,” wrote the Süddeutsche Zeitung. “Zeit” even wrote: “The most exciting piano trio in the world.” With the follow-up albums [em] II (ACT 9655-2) and [em] 3 (ACT 9660-2), the trio advanced to the height of young German jazz, along with the individual musicians. The tributes of various magazines (including the “Choc” of the French Jazzman) were followed by prizes including the Ronnie Scott‘s Jazz Award and the BMW World Jazz Award. Parallel to this, Michael Wollny’s reputation as a pianist rose to world star status, and was recently honoured with the ECHO Jazz award. Siggi Loch’s sure sense for talent had once again proven itself as he had launched the pioneering ACT series “Young German Jazz” with [em].

So what exactly is the secret of this trio? On the one hand, it is of course the exceptional individual skills of its members: that unique combination of excellent technique, inexhaustible creativity and instinctive interaction as is embodied by Michael Wollny and which is proven, besides [em], by other duet recordings with Heinz Sauer, Joachim Kühn and Tamar Halperin. On the other hand it is also the ever sonorous and rhythmically driven bass of Eva Kruse – which sprawls from classical to modern music and is in demand from Sweden to Germany. And, of course, the highly precise, unrivalled versatility and extremely percussive drumming of Eric Schaefer, with which he has also become an essential element of bands such as Johnny La Marama, Ununumium and the Arne Jansen Trio.

Yet the [em] trio is more than simply the sum of its individual parts. “Regardless of who composes, none of our pieces would sound the way they do without having gone through the hands of the whole band,” says Michael Wollny, confirming the group’s collective approach. [em] is a musical melting pot for all three, a sort of creative “fuel station”, a catalyst which releases unthinkable powers. Yet the project has also been experiencing a difficult phase recently: maternity leave and the effects of weariness and fatigue gnawed at [em] as did trying to fit in the growing number of other commitments of its members. The performance at Salzau at JazzBaltica as part of Michael Wollny’s “Artist in Residence” became the “liberating coup” as Eva Kruse describes it. “Everything on one card” was the motto. Michael Wollny explains why this was so: “We hadn’t played together for a long time and were under great pressure as we knew that the concert would be recorded. It was something special for everyone to perform on the main stage at JazzBaltica. All this then culminated in the energy of that evening.”

Listening to “[em] live”, this sentiment can be immediately understood. Firstly, in the four old hits: Eric Schaefer’s energy-laden “Phlegma Phighter”, his homage to the rock band Gorilla Biscuits and the brilliant “Arsène Somnambule”, as well as Michael Wollny’s rousing tribute “Kiyoshi” to the Japanese horror film director Kiyoshi Kurosawa, played as concisely as never before. Secondly, in the six new pieces, which were jointly worked on and played during a stay at Schloss Elmau in autumn 2009 – a magical venue for many ACT artists – which had been made possible thanks to the audience prize of the BMW Welt Jazz award. A new type of confidence and rhythmic quality can be heard here, for example in Kruse’s “Sov Lilla Alma”, dedicated to her little daughter and which is reminiscent, with its drive and dynamic, of Esbjörn Svensson. “We wanted to make it more groove emphasised,” says Schaefer of the almost rock-like approach, which despite the effervescent ideas and filigree elements is particularly highlighted by pieces such as “Etude No. 1” and the closing track “Break it”.

And so the circle concerning the relationship of [em] with JazzBaltica and their own story comes to a close. Kruse vividly describes this: “Our development is like the seasons: The first album was the spring where we threw everything together and let it grow. The second was more heated like the summer and the third was like autumn – more peaceful, calmer and mellow. With the fourth we overcame the winter. So much has happened, we tidied up everything and now we know that this will continue.” Bands really are like relationships...

Ulrich Olshausen (FAZ newspaper): “This group’s intensely vital, interactive music has propelled them to the top of the pile of what is currently the most popular format of jazz line-ups – the piano trio.