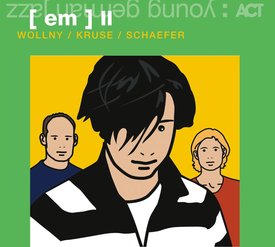 "I think we all have the impression that things are changing right now," says Michael Wollny, one of European jazz's leading young musicians. Wollny is right. Something is in the air. Everybody is talking about it. A sense sharpening breeze of change is blowing across Europe as musicians, promoters, record companies, commentators and fans are gradually becoming aware that European jazz is in the ascendancy, and that some of the most interesting, challenging and dynamic jazz is no longer coming from its land of origin, but from the Old World.

These are exciting times and from the critical acclaim that has come the way of Wollny and his colleagues - Eva Kruse on bass and Eric Schaefer on drums -  who comprise the trio [em], it is clear they are at the forefront of a burgeoning European jazz explosion.

Like many jazz groups today they have opted for a band name, rather than the more "formal" Michael Wollny (or Eva Kruse or Eric Schaefer) Trio, which seems a bit, well, out of date in these changing times. "We liked the idea of having a band name," says Wollny. "We wanted to come up with something that was simple and striking at the same time. [em] is a phonetic spelling, the 'sound' of the letter 'M'. 'M' itself is a '3' (the 'trio') turned 90 degrees anti-clockwise, so [em] is more or less a symbol for 'the sound of the trio' ... and [em] involves all our initials (E-va E-ric M-ichael)."

Their debut album Call it [em], released in the ACT label's exciting Young German Jazz series in 2005, immediately attracted widespread acclaim. Here was evidence that young musicians were now emerging in Germany who could hold their own on the world stage. With the release of [em] II, not only do they deliver on the enormous promise of their first album, they also show convincing signs of artistic growth.

In the year leading up to the recording of [em] II the trio have played more dates than in any other period during the group¡¦s four year history. This has meant that the delicate blend of personal musical chemistries built up on the bandstand is now shaping a specific group identity. Knowing each other musically and being intuitively able both to participate in and anticipate musical developments make this an ensemble that sounds more than the sum of its component parts - the ambition of any group in music.

The compositions on [em] II are shorter, crisper and to the point. Of the fifteen tracks on [em] II, the one that best sums up the sound of the trio for me is "Dance & Grow": The powerful duality between the written and the improvised is typical of the challenges these young musicians set themselves, and the aplomb with which they carry it off verges on the breathtaking.

As [em] are based in Berlin, their unique local surroundings and pace of life inevitably - subconsciously even - are reflected in their music. "It's such an undefined, unfinished city at the moment, says Wollny. Everything is changing all the time. Maybe that's something that influences the music. You don't quite know where the music is heading but you just make it up as you go along and try to make sense of it without having a precise aim in your head. Maybe that's a uniquely Berlin-esque thing at the moment!"

In an era of political turmoil and complex negotiations of personal and cultural identity, jazz, more than ever in its history, is being used as a means of asserting cultural identity. Throughout Europe - indeed throughout the world - jazz is being re-imagined by musicians who seek to make their music connect with their own surroundings and want to give it life and vitality that is relevant to their own particular musical situation. This is where the future of the music lies. By taking the essential spirit of the music and giving it their own personal slant, shaped by their own cultural and personal experiences, [em] is one reason why the future of European jazz looks so bright.