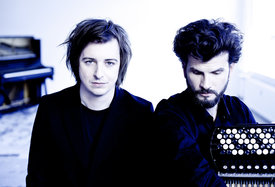 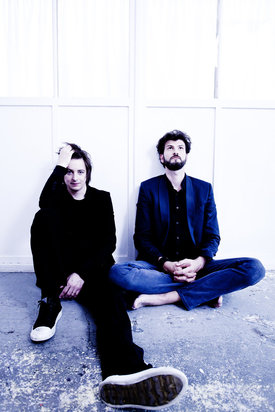 Impromptu meetings can have far-reaching consequences. German pianist Michael Wollny and French accordionist Vincent Peirani quite literally got to know each other on stage during the ACT20 Jubilee Night at the “New Morning” club in Paris in 2012. Before performing together that night, they had exchanged little more than a peremptory handshake. However, those who heard their first spontaneous jam as a duo certainly won’t have forgotten the sheer excitement, and it has certainly stayed in the minds of both of the musicians. “It was like we used to play for decades together! No need to talk, no need to look at each other, we just breathed together…” Wollny is also full of praise for his colleague: “With Vincent you can roam freely across a whole gamut of styles and moods, and nothing gets in the way. You can quite simply chuck anything in his direction, and he will absorb it, transform it and give it straight back to you. It’s like a version of tennis on fast forward, with the balls coming in from all directions.” After that first meeting, Peirani immediately sent Wollny an email. He wrote: “I’ve attached a recording of last night. Have a listen. I’d really like you to play on my next album.” And that is indeed what transpired: Wollny became part of the trio for Peirani’s first ACT album, “Thrill Box.” As Die Welt said of that CD: “The searching and probing for contrapuntal beauty, the uncommonly lyrical playing have what it takes to touch the heart and make one hold one’s breath.”

Both musicians made a name for themselves in the others homecountry: Wollny’s highlight was being awarded European Jazz Musician of the Year 2015 by the Académie du Jazz, which represents jazz journalists in France. It is worth noting that France’s home-grown stars normally make hardly any impact in Germany either. The statistics of Peirani’s touring schedule show why that is: he gives at least 150 concerts per year in his own country, which means he already has quite enough on his plate. That said, Peirani’s music has definitely struck a chord in Germany, and his performances have been greeted with huge enthusiasm. He was awarded the much-coveted ECHO Jazz 2015 for the best European Ensemble of the Year for his duo album with Emile Parisien “Belle Epoque,” and was the subject of two separate profiles on German national TV.

It has taken three years since “Thrill Box” for their next album project together to take shape. In the interim, the careers of both Peirani and Wollny have witnessed meteoric rises, more or less in parallel with each other. Both of them are considered all over Europe as the leading jazz musicians of their generation. What makes them stand out in particular is that they are extending the horizons of their instruments, that they strive to create ever-new fantasies in sound, and in doing so they are setting new paths for European jazz. The main German broadsheets have commented on this: Die Welt wrote that hearing Wollny’s playing definitely becomes “addictive.” In the UK, Jazzwise likened Wollny’s career to “a vortex of creativity pointing in a relentlessly upwards trajectory.” The British Observer stated that Peirani “breaks new ground for his instrument.” And his playing has been described by LondonJazz News as having “a magic, an aura, an other-worldliness.”

These two much-lauded, and exceedingly busy musicians finally found some time together during which they could let their musical paths coincide. In “Tandem” they are to be heard exploring and expoiting all the sound possibilities of their instruments. “I hear Vincent's playing less and less as an accordion, and more as an orchestra with thousands of possibilities,” says Wollny. And Peirani loves the impressive freedom this duo provides. With a gleam in his eyes he says: “Michael can text on his mobile and play the piano at the same time. Everything is possible with him. The sky is the limit for Michael!”

For their rehearsal time at Schloss Elmau, both of them had brought along long lists of their favorite songs and some other ideas, and had fun seeking out the best ones. “We were both very conscious that we did not want to make a concept album, but rather to encompass a very wide stylistic range. Both of us love – and also listen to, and play - all kinds of music. We prepared and arranged some of the pieces with great care, whereas we left others very free and completely open to the spontaneous ideas,” explains Wollny. Their stylistic palette does indeed range widely. There is the mysterious, suspense-laden Björk Classic “Hunter.” They play Samuel Barber’s “Adagio for Strings,” which the film-absorbed Wollny first encountered in the soundtrack of Oliver Stone’s “Platoon.” There is the anthemic "Fourth of July" by Sufjan Stevens, a songwriter much admired by Wollny. The up-tempo number "Vignette" by Gary Peacock is perhaps the only “classic” jazz tune on the album. The duo also plays a beautiful piece ("Song Yet Untitled") by the Swiss vocal soloist (and new ACT artist) Andreas Schaerer.

Peirani’s preference for the melodic is underlined in his two original tunes on this album, above all in “Uniskate,” and also in Tango “Travesuras” by Peirani’s friend Tomás Gubitsch, an Argentinian-born composer based in Paris. This piece, like “Fourth of July,” does not come from the Paris studio recording sessions, but is from the live recording of a magical concert which the duo gave at Schloss Elmau in February 2016 following the rehearsals for “Tandem.” Both of the original compositions by Wollny take the listener off in experimental and expressionist directions. The dialogue between them constantly brims with ideas, and they also have a perfect way of circling in and out of each other’s way. At one moment Wollny might be keeping quiet in some reassuring chords, but then he can break out into a fiercely wild passage, or he might lean into the piano to extract some muffled percussive sounds from it. As for Peirani, he can give the solidity and the seriousness of a church organ, but will also chirrup in little commentaries at the top of his instrument’s range, or deliver volleys and cascades of notes at improbable and probably illegal speeds.

This duo of superb musicians can simultaneously be highly refined, and yet completely off-the-wall. They are two of the brightest lights of the international firmament of jazz as seen through a European prism. They have also put down a marker with “Tandem”: their stellar collaboration is most definitely going places.