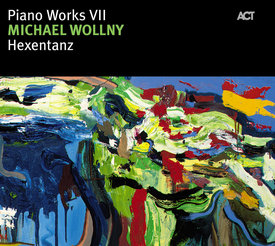 What does jazz have in common with Mary Shelley’s “Frankenstein”? Usually not very much, but fascinating parallels between the two emerge on this new release. Alluding to the term “gothic novel”, Michael Wollny describes the music on this album as “gothic music”. He has created a personal and colourful musical language that accommodates films by Ken Russell or Vincent Price just as easily as it embraces the ambivalence of Franz Schubert’s musical universe or the profound pop songs of Björk. Wollny is not concerned with the superficial thrill, but rather with an expanded understanding of the awesome, with goose bumps in the twilight, and first and foremost with enthralling piano music.

And it is enthralling music that we are entitled to expect from this young German star of the jazz piano. Few jazz musicians of his generation have received comparable recognition in the jazz press over the last two years. The “Financial Times Deutschland” describes him as a “comet of the German jazz scene” and the British magazine "Jazzwise" takes it for granted that "Wollny could well become a major talent in European jazz“. Thus, it was no accident that Call it [em] (ACT 9650-2), the impressive 2005 debut of his trio, set the tone for the successful ACT series “Young German Jazz”. His duo recordings (Melancholia ACT 9433-2 and Certain Beauty ACT 9442-2) with Heinz Sauer, the icon of German jazz saxophone and Wollny’s elder by 46 years both won important prizes not only in Germany. Reviewers were hearing “great European jazz” in his recordings – and all of them agreed that here was a musician who combined a technical brilliance with an extensive and unique musical conception, a musician with a gripping expressiveness. An artist whose fabric resonates with the aesthetical complexity of the contemporary world and who knows, and has assimilated, musical traditions from Bach to Cage and Tatum to (John and Cecil) Taylor. An improviser without inhibitions, who can create from within or without tonality and the world of mainstream jazz. Wollny creates his own musical universe, a language of a kind that only a musician who grew up with Björk, Jarrett and Ligeti simultaneously can create.

Confronted for the first time with the idea of a solo project, Michael Wollny retreated for a month to the island of Gotland. He listened to Schubert, Steve Reich, Björk and music by Joachim Kühn (much revered by Wollny), read Edgar Allen Poe and studied films by Werner Herzog, David Lynch and not least Ken Russell’s 1986 work “Gothic”; a film that fascinated Wollny as a “grotesque brainstorm on the subject". All these influences came together to provide the thread holding this album together.

The first track – fittingly entitled “Initiation” – sets the tone for this complex pianistic motion picture. While the individual movements of “Schubertiade”, the next piece, may carry Schubert-titles, they do not use themes by the Austrian composer. Wollny was more interested in Schubert’s fragile musical language, Schubert’s music as an expression of the dark side of German romanticism. Just as his treatment of the three Björk songs is characterized by an empathic toying around with their atmosphere and basic ideas, and not by a jazz reharmonization.

The heart of the album is the five-part suite “Hexentanz” (“Witch Dance”), that gave the CD its title (the name itself is a reference to a collage by Wollny’s artist-friend Charlotte McGowan-Griffin): Movements from a strange world, mostly quiet, slow, dangerous but also distant, weird, enchanted and in slow motion. Slowness being a motivating principle that infuses the entire album, that almost brings “Enchantment” to a standstill, creating moments in which quiet becomes that split second that produces insight.

Wild angularity, pianistically beautiful, fragile and cultured sound production, enchantingly tender moments and oppressively spooky moods all come together on this album in a seamlessly organic way. Wollny sends the listener on a highly fascinating trip out into a night of living notes that originate not in Transylvania, but from a musician with an enormous power of imagination. A “gothic music” that opens up an entirely new world.