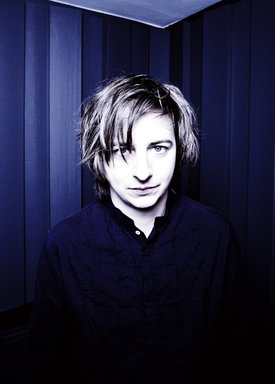 This release owes its original inspiration to a book published in 2013 entitled “Nachtmeerfahrten” (Sea Journeys by Night), which takes the reader over to the dark side of romanticism, to a world of fantasy, of eerie shadows, and things that go bump in the night. Producer Siggi Loch edited the “Meer”/ sea part out of the title, which therefore became “Nachtfahrten” (Night Journeys), which suits this pianist, who is a creature of the nocturnal realm. He feels very much at home in a world of grey cats and blurred outlines, where the contrasting emotions of the moment can leave all rational expectations behind; this is a backdrop which is alive with possibility, but also with trepidation.

Michael Wollny, who was described by FRANKFURTER ALLGEMEINE ZEITUNG as a “complete piano master“ and by DIE WELT as „the most exciting German jazz pianist of our time,” has been taking the communicative games of action, inter-action and reaction in his trio in all kinds of interesting directions and new levels over the past ten years. To give just one example, he and drummer Eric Schaefer have fine-tuned the way they create intense energy, making their ways of working together more and more intuitive. Last year, however marked a watershed, as Wollny achieved considerable public success with the album “Weltentraum,” without sacrificing one iota of the virtues of his playing. All his refinement is still there, as is the stylistic breadth of his playing. Wollny draws on a deep well of inspiration, from Coldplay to Schubert or Messiaen. Jazz greats such as Monk and Bill Evans are also right under his fingers. He clearly respects and values the jazz canon with its singable melodies and its song forms, but he isn't confined to that; he is also capable of laying down a hypnotic groove. It is an irresistible combination, and has for the first time enabled him to engage with a large audience.

His popular success with “ Weltentraum” has also brought awards in its wake, notably three ECHO Jazz prizes. Nevertheless, Wollny is too big a musical talent either to get comfortable or to rest on his laurels. He has ventured into new musical territory in this new album. In fact, the means to do it came to him in one fell swoop, without him being fully aware of the implications at the time. His method is reductive. “Taking something away,” as he explains it now, “has a tendency to create unease.” With that realisation, everything seemed to align and take shape.

Wollny worked with Eric Schaefer to identify fragments, ideas and motifs. He combined old sounds with new, his own material with borrowings from film, literature, painting, philosophy, aesthetics. All the pieces of the puzzle fell into place, with the help of producer Siggi Loch. Everything that has been included here carries with it a sense of musical inevitability. For example the first track “Questions in a World of Blue” an adaptation of the Twin Peaks music by Angelo Badalamenti, makes it abundantly clear that the listener can expect the answers to the questions which this album asks are going to be anything but predictable.

Wollny sets the scene with a few “poisoned” major chords. They allow uncertainty to glisten through them. Meanwhile Schraeger charms a few delicate brush sounds out of his drum kit, and bassist Christian Weber's supple bass playing completes the picture and sets it into relief.

This is a way of playing which we have not heard from Wollny before. It is music of steady state rather than of development. These are sounds that hover, which spread like ripples. Improvisation, as it is known from the jazz tradition, with its logical processes for developing solos, has been put aside in favour of something else. The shaping of melody, the conventional conversations within a piano trio are replaced by sounds which develop layer by layer. Wollny here is casting light onto “Neon Nocturnes,” he is developing sound pictures with a strong character of their own, finding natural resonances in darkness. He is not just asking questions that remain open, he is ensuring that they lead to new and ever more interesting questions.

Wollny takes the listener to recognizably fictitious locations. Each one becomes the pretext for a new “Nachtfahrt” (Night Journey): Twin Peaks, the Bates Hotel from Hitchcock's Psycho, the valley of the castles from Edgar Allan Poe's early story “Metzengerstein”. Making this disconnect from reality is a subtle way to prepare the listener for the discontinuities. What drives Wollny here is a conscious desire to create complex ambivalence, as he juxtaposes what appear on the surface to be quite simple motifs. This is a process which Wollny has discovered and developed for this album. A possible source of inspiration here is the music of Chris Beier, with whom Michael Wollny studied at the conservatoire in Würzburg. At that time Beier was starting to suffer from focal dystonia, a severe condition which takes away muscle memory. Beier was obliged to write out and to prepare his music bar by bar. His playing became perceptibly hestitant and fragmentary, but at the same time translucent, pared down and incredibly intense. “I found the way he played had a devastating effect on me,” remembered Wollny. This method of intense paring-down runs right through “Nachtfahrten” from the first note to the last.