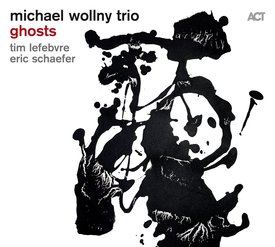 Michael Wollny, born in 1978 in Schweinfurt, internationally successful jazz pianist, music inventor, unconventional thinker, popular figure. Nobody plays piano like him. His trademark: the unpredictable, the quest for the never-before-heard, the courage to devote himself to the moment, to make the unforeseen sound self-evident. His desire to keep reinventing himself, both in terms of sound and composition; that is what makes him a “consummate piano maestro” (FAZ) and “the biggest (jazz) musician personality that Germany has produced since Albert Mangelsdorff” (Hamburger Abendblatt).

"As an improviser, you often find that it‘s not the compositions themselves you‘re playing, but your own memories of them. And as these memories come back to you in the moment, they assert their continuing existence in the here and now," says pianist/composer Michael Wollny. In other words, songs are like ghosts. Wollny‘s new album "Ghosts" is a gathering of some of the ghosts that regularly haunt him. Typically for Wollny, they range from classics like Franz Schubert's "Erlkönig" to jazz standards, film music, songs with a certain fragility by Nick Cave, say, or the band Timber Timbre, and also include his own darkly evocative original compositions.

In addition to Michael Wollny‘s leanings towards scary fantasy, the idea of "hauntology" is an important one for him. This term, which has been a looming presence in debates about pop music for some time, awakens memories of a distant past: forgotten, ghostly and spectral sounds. Wollny: "This perspective, these sounds and not least the term itself have preoccupied me in the past few months – and those reflections have led to the idea of producing a piano trio album dealing with the subject." A ghost album, then, that ventures into the depths of conscious and unconscious memory, sifts through stories originating in the past and which cast shadows on the present. This is a story of the friendly ghosts which surround us...but also of some evil spirits which we thought would never return.

The line-up to be heard on "Ghosts" is a direct follow-up from "Weltentraum", an album which now clearly stands as a cornerstone in Wollny's discography, since it established his reputation as an artist "who can turn every conceivable piece of music into an experience to take your breath away" (Die Zeit). American bassist Tim Lefebvre‘s very particular sound and vibe are to be heard on albums by David Bowie, Wayne Krantz and Elvis Costello. Wollny‘s most recent adventure alongside him was the internationally acclaimed project "XXXX". Wollny says: "When you work with Tim, you're not just working with one of the world's top bass players - Tim always has a foot in the world of sound processing, and is constantly expanding his electronic tool-kit. In addition to that, he creates phenomenal clarity in music and in overall sound, which has an unbelievable effect: it gives a shape and an organisation to the music without ever restricting you."

Wollny has been playing with drummer Eric Schaefer for almost 20 years. Like Lefebvre, he is also a complete original, a musician with an almost orchestral approach to sound, an unmistakable sense of groove and impressive individuality."The three of us are aligned in a special , inexplicable way. It‘s hard to describe but the effect is massive," says Wollny. "Last but not least, we are connected by the long time we have spent together. As a trio we have a specific sound, and we are now developing that in a wholly new direction." On "Ghosts", the trio has created a sound in the specific tradition of "Southern Gothic": deep, earthy, full of vibrating, rattling low-tuned strings and drumheads, evoking memories of clapped-out guitar amps, distorted cones of speakers cones. The atmosphere here is oppressively hot, the air heavy with dust.

Before "Ghosts" was actually recorded, another trio - Michael Wollny and the two co-producers Andreas Brandis and Guy Sternberg- convened. Brandis, who had already been heavily involved in the concept of "XXXX", brought to the table the concept of an album of songs, with the right people involved. Sternberg - he, as sound engineer, and Wollny had created the sound world of "Wunderkammer", which was to serve as the point of departure for this new album. Wollny says: "Even before the setlist for the album was fixed, I had a very clear sound in mind, which we discussed extensively with Guy and Andreas beforehand." The trio inhabits an acoustic space where nothing is superfluous or goes to waste: the long-dying resonance from a cymbal, drum or plucked string, or a sound from a reverberant surface, all are somehow there in the air. And sometimes all that remains is an acoustic or an electronic echo, a sound that hovers and acquires its own mysterious and spectral existence.

All the tracks on the album have one thing in common: each is a snapshot in the life of an individual song. Wollny: "Especially in jazz, there is never one definitive version of a piece. The standards repertoire always haunts you in the best sense of the word, these songs are never finished, they always resurface." And so, when it comes to classics such as "I Loves You Porgy" and "In a Sentimental Mood", Wollny, Lefebvre and Schaefer‘s primary point of reference is not the original compositions, but versions by Nina Simone and John Coltrane / Duke Ellington. And from a time before jazz standards, there are the spirits that inhabit folk songs and which reappear whenever these songs are sung. As, for example, in the traditional Irish folk song "She Moved Through the Fair", which is almost a prototype for the idea that ghost stories are to a large extent also love stories. As is also the case for "Willow's Song" - a seductive and dangerous love song from the legendary soundtrack for the cinema thriller "Wicker Man", a classic of the Nordic horror genre, as strange as it is frightening. Also related to "grand guignol" and nature: a startlingly vivid arrangement of Franz Schubert's "Erlkönig". In addition, in reference to the sultry "Southern Gothic": "Hand of God" by Nick Cave & Warren Ellis, audibly dedicated to Wollny's great mentor, whom he describes as the "Hand of God", Joachim Kühn. And furthermore, "Beat the drum slowly" by the band Timber Timbre, a perennial favourite of Wollny's, and "Ghosts" by David Sylvian - perhaps the clearest representation of the themes that characterise "Ghosts": here we find that melodies and sounds can haunt memories that stay either hidden or repressed, and in a way that is at the same time seductive, touching, mysterious and profound. Two original compositions by Wollny find their place naturally in this cleverly selected programme, which is as heterogeneous as it is coherent: first is Wollny's eponymous contribution to "Hauntology", for him "a ‘song without words‘ which comes from another, past or strange, parallel pop world" and then "Monsters never breathe" with its melody that stretches into infinity and could only ever be sung if it were possible to sing without needing to pause for breath.

"All the songs are living ghosts and long for a living voice" wrote the Irish poet Brendan Kennelly (1936 - 2021) in one of his most famous poems. For Michael Wollny, this line is a cryptic and yet profound insight. It adds an eerie beauty and serves as a motto for his fascination for the magic of songs which this recording represents. When we talk about ghosts, we look into what seems to be the past, and bring back memories from it into our lives. We as listeners can all believe in the "Ghosts" that the Michael Wollny Trio hear. Because we can all hear them and recognise them.