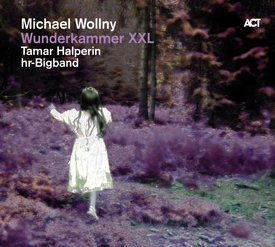 Twice the listening pleasure for all Michael Wollny fans, in a limited edition and at a special two-for-one price: The Collector's Edition unites the original studio album of Wollny's magical sound adventure "Wunderkammer" with an XXL version recorded live with the hr big band at the Deutsches Jazzfestival in Frankfurt in October 2012.

"Germany's most exciting jazz pianist" exclaimed the newspaper Die Welt shortly after the release of "Michael Wollny's Wunderkammer" in the autumn of 2009. The Frankfurter Rundschau spoke of a "big step forwards in a totally new direction", indeed, that album marked the start of a new phase in Michael Wollny's career. The pianist, who repeatedly manages to surprise audiences with his music, was consequently raised to the summit of European jazz with the award of the coveted ECHO Jazz award as Best National Pianist. The Hamburger Abendblatt said that he is the "biggest (jazz) music personality that Germany has produced since Albert Mangelsdorff" and the FAZ sees in him a "consummate piano virtuoso," who "brings with him everything that can be asked of a perfect jazz pianist: masterly technique, exuberant imagination, discipline and the aptitude for creative chaos, sensitivity and aesthetic flair".

Nobody plays piano like Michael Wollny. His trademark: the unpredictable, the quest for what has never been heard before. His intention: to keep reinventing himself time and time again, both in terms of sound and composition. "Michael Wollny's Wunderkammer", recorded together with the harpsichordist Tamar Halperin, bears witness to this: piano, celesta, harpsichord, harmonium and Fender Rhodes go on a journey of discovery to new worlds of sound, somewhere between minimal music, electronic music and modal jazz. A wonderful sound-trip.

To this day, the Wunderkammer has never let Wollny loose. On 27 October 2012, the Deutsches Jazzfestival Frankfurt gave him the opportunity he had longed for to interpret it on a large scale together with the hr big band. Arranger Jörg-Achim Keller took over the orchestration for the big band, and the concert in the hr-Sendesaal broadcasting theatre was to be a triumphant event: "Wunderkammer XXL" sounded "impressively different in the subtly differentiated orchestra arrangement" and gave rise to "a fascinating interplay between keyboard magic and inspired ensemble playing" (Frankfurter Rundschau). The FAZ told of an "unbridled joy of making music and intelligent creative power" that the "ingenious sound inventor Michael Wollny" formed with the hr big band under the baton of Jim McNeely. The concert provoked storms of rapture from the audience, with 20-minute standing ovations that were unprecedented at Germany's oldest jazz festival, held for the first time in 1953.

Michael Wollny wouldn't be Michael Wollny if he didn't have music on his mind again. And so it is that the Collector's Edition closes a creative chapter while at the same time opening new doors. For example, Wollny and his piano are currently in the studio with the exceptional American bassist Tim Lefebvre, the proven [em]-drummer Eric Schaefer and saxophone shooting-star Marius Neset as guest. The new album will be released at the end of February 2014 and presented on the big Jazznights tour starting 21 March together with the Nils Landgren Quartet.

"Wunderkammer XXL" with the hr big band will be performed two more times: In November at the Enjoy Jazz and at the Jazzfest Berlin.