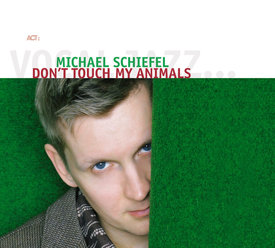 Michael Schiefel – vocals (all sounds are vocals only)

Recorded and mastered in March 2006 by Wolfgang Loos at Traumton Studio, Berlin, Germany

In the beginning there was courage. Michael Schiefel wanted to sing; yet he did not feel moved to travel down the jazz tradition's well-trodden paths. Sure, he would need to acquire a solid training in vocal technique, which he did as a student at Germany's top-notch University of the Arts (UdK) in Berlin. He would need to pay his dues, which he did during Berlin's cultural awakening, playing with small bands in the city's clubs in the early nineties. The rest of it though, was open, was his to shape. Schiefel began to experiment, listening to Bobby McFerrin, who showed him that an artist doesn't necessarily need a band to convince an audience. And he discovered a technical toy, a loop-machine that enabled him to reproduce his voice live in real time. The soloist developed into an orchestra, linear melodies grew into playful three-dimensional vocal architecture. A sonic window of opportunity here, some musical stairs and a hidden emergency exit there; something that would be a way out, back to the root of it all, his singing.

This was the state of affairs in the mid nineties. Schiefel dared to dive in at the deep end, and started a solo career with "Invisible Loop" (1998) and "I Don't Belong" (2000). Reviewers and audiences were similarly thrilled. They admired his ability to transform himself musically, to change into different characters. They praised his timbre, the precision in his intonation, stylistic flexibility, and were fascinated by his very personal celebration of creativity, and a wealth of ideas that seemed without par in his country. "A star is born" one broadsheet proclaimed, and this summarized the mood in the scene. Schiefel himself was a lot more matter of fact; he felt he still had a lot to learn, despite his success. Furthermore, the Berlin scene was beginning to sparkle, and was producing more and more interesting projects. Thus the soloist was soon joined by the team player who explored his funky roots with jazzIndeed, celebrated intellectual inspiration with Thärichens Tentett, cultivated the ballad in his own trio formation, and played classical modern jazz with David Friedman.

What had been a well-kept secret became common knowledge, even part of the establishment. In 2001 Schiefel became a professor at the "Franz Liszt Conservatory Of Music" in Weimar. The just turned thirty-one year old was suddenly in a position to pass on the results of his creative process to his students. With "Gay" (2003) he featured his trio on an album of love songs. Two years later, he and the quintet jazzIndeed dedicated themselves to the repertoire of New German Wave with "Blaue Augen" (ACT 9651-2). As his calendar started filling up more and more, the Goethe-Institute sent him around the world as a cultural ambassador. Not least due to his vocal and interpretative talent, Thärichens Tentett developed into an in-demand festival act. In the meantime, he continued writing, working on and trying out his solo repertoire.

Technology finally provided further momentum. An update of his beloved loop-machine was released, providing new possibilities of acoustic collage. New repertoire had accumulated, and thus Michael Schiefel went into the studio once more to continue his vocal research with "Don't Touch My Animals". Some of the songs are German, some English; they recount stories of love and the tangle of relationships, fabricate surreal sketches of city life or reflect ironically on Germany's inherent contradictions. All the beats, sounds and melodies are vocal, and come together to construct a brilliant patchwork of pop/jazz moods and rhythms.