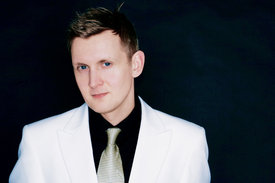 Michael Schiefel was born in Muenster, Germany in 1970. Inspired by a desire to join the emerging post-Wall jazz scene, he moved to Berlin in the early 1990s to study at the city’s renowned University of the Arts. Since then, he has dazzled his fans at home and abroad with an array of solo and band projects that have yielded a dozen albums over the past decade.
To date, Michael has released three solo albums. His first work, Invisible Loop (1997), was hailed as one of the most promising debut albums of the decade; while his second release - a more introspective album entitled I Don’t Belong (2001) - met with equally critical acclaim. Michael’s latest solo album, Don’t Touch My Animals (ACT 9711-2), was released in September 2006. The album features songs about love and life in the big city and between the continents.
In all of his solo projects, Michael experiments with his distinctive virtuoso voice by combining it with loop machines and other electronic devices. In conjunction with his original compositions and lyrics, this dynamic mixture of vocals and electronics produces strikingly unique ways of expressing passion, joy, and alienation.
In addition to his solo performances, Michael collaborates with many other musicians on a wide range of projects. But no matter what genre he sings - be it funk and pop with JazzIndeed, classical-inspired big band with Thaerichen’s Tentett, modern jazz with David Friedman, or Balkan beats with the German-Bulgarian quintet Batoru - Michael’s multifaceted voice receives consistently high praise from audiences and critics alike.
In 2001, Michael joined the faculty of the Franz Liszt Conservatory in Weimar as a Professor of Vocal Jazz, thereby becoming the youngest music professor in Germany. In addition to playing at numerous festivals and teaching master classes throughout Europe, he has also performed as a guest artist of the Goethe Institute in the United States, Africa, and Asia.