Young German Jazz at its best 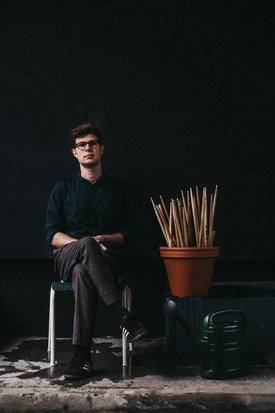 Cover art by Jo Pauli: Nicht Sehen, by kind permission of the artist

Schools are such special places. Through providing the setting for encounters with great teachers, through developing a sense of the cohort, these venerable institutions can, when things go right, awaken a drive and an appetite for what comes next. The Leipzig University of Music and Drama is a case in point. It was where Max Stadtfeld studied, under teachers including Heinrich Köbberling and Michael Wollny. At the beginning of 2019, Wollny chose the 25-year-old drummer for his BAU.HAUS.KLANG quintet with Emile Parisien, Leafcutter John and Wolfgang Heisig. This experience wasn't just the continuation of the teacher-student relationship, because Leipzig offers other opportunities too: several clubs and other venues where someone like Max Stadtfeld could go and really free up his playing and become part of a community.

It is important that young jazz musicians can apply what they have learned. They need to get out and find their own stories because jazz itself lives through the selves of its protagonists. Only then can it become authentic and be a reflection of the world beyond. That is what is needed for the chain reaction to begin. "Music compresses impressions," says Max Stadtfeld. When he talks, his lust for life is palpable; and even more so when he plays. "Rhythm fascinates me," he says. And he does indeed feed his own rhythmic impetus and energy into his band, enabling the soloists to rise up off it. He occupies just the space he finds necessary. It's about becoming empowered in the moment by doing the right thing. That sometimes means being able to step back and restrict oneself to just details, nuances and delicate tracery. One must not be too preoccupied with oneself, because then one loses the wood for the trees. The real fun begins when you can leave caution and over-discipline behind, ideally taking the whole band with you.

Stax (pronounced schtaks, a free-form short version of the name of Max Stadtfeld), is an ideal band for such departures. The quartet found each other on the Leipzig-Cologne axis, and there was an inevitability about the way it all happened. That much was clear from the get-go a year or two ago. They met, rehearsed, played, they did a few concerts – and things just clicked, above all on the interpersonal level. And you can hear it. Guitarist Bertram Burkert's playing had fascinated Max Stadtfeld right from the start, because Burkert was fully-formed as a player incredibly early, with a capacity to add tiny subtleties and a certain abrasiveness. In the context of the current guitar renaissance, he is a genuine discovery.

Burkert inhaled his John Scofield, but what he exhales is something different: he creates wonderful long curlicues. And the way in which these extended phrases intertwine with those of Matthew Halpin is simply a feast for the ears. Halpin, an Irishman now based in Cologne, studied at Berklee. He is a talented, rhapsodical tenor saxophone player with a many-faceted sound which he always makes new and interesting, because of the way he feels the music and doesn't over-aggress. Old-school jazz, with all that need to play higher, or faster or with a sound as fat as possible is not his thing at all. As a genuine story-teller he can illuminate the background with emotion or shore it up with maturity, and those abilities turn his dialogues with the guitarist into tours de force which end up in new, unexpected and emotional places. Stax assigns the traditional role to the double bass, which makes Reza Askari the ideal bass player. He studied with Dieter Manderscheid and Sebastian Gramss in Cologne, toured with Lee Konitz, and has amassed a not inconsiderable discography. He provides a solid, deep foundation for the other musicians.

The compositions - eight by Max Stadtfeld and two unexpected standards – are in that vein. Their music is not just some intellectual showing-off, it bobbles along in the rhythm-oriented mainstream, and yet, over and above that, it is imbued with an astonishing sense of both freshness and maturity.  The album begins with the hymn-like "Liggeringen", a homage to Max Stadtfeld's hometown near Lake Constance. This is where the journey begins. New spaces are opened up and filled again and again with improvisational vitality. Sometimes the starting-point is a thank you to a friend ("McDain"), sometimes it's a mad-up word that can launch an idyll ("Kluduhulo"), or sometimes it's just the fun of either packing "Fifteen Shades of Grey" into fifteen bars, or of remembering Cole Porter ("Begin The Beguine") or the Jungle Book. What matters is to keep things flexible but also to maintain a fundamental honesty towards guiding principles, so that the band can stay spontaneous and bring out something new every time. To run with things – and to let things run. Stax are playing the music of now - and at an amazing level of achievement. These musicians formulate shared narratives that go way beyond the mindless clicks and zappings of their generation.  They listen to each other and react, and it’s different each time. There's a lot of substance to them and what they do. They have earned and deserved the trust they receive. School’s out for summer, for ever, and for the good. This is young German jazz at its best.