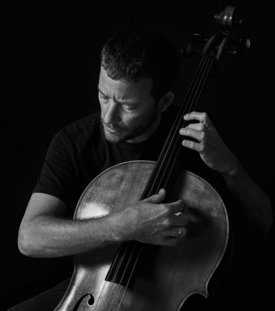 Cover art by Mimmo Paladino, used with the kind permission of the artist

In “El camino de los vientos” (the way of the winds) Matthieu Saglio has not just had a bold plan for an album, he has also carried it through and made a genuine success of it. The French-born, Valencia-based cellist has followed his instinct for open-mindedness in music and welcomed in some very different musical cultures, with his own contribution as composer, cellist and producer as the strong linking thread running through the album.

Saglio’s most recent association with ACT was as the co-founder and main composer behind NES, the trio which had a runaway success with the 2018 album “Ahlam”. But whereas that album set about exploring French and North African sonorities, Saglio casts his net considerably wider here. While composing the pieces for it, he imagined and dreamed how the compositions might sound with particular guests playing along with him. His plan was that some of the guests on the album would be people he has a long history of playing regularly with over several years, such as the singer Isabel Julve, the French-Iranian percussionist Bijan Chemirani, flamenco guitarist Ricardo Esteve... Others were simply “people whose music I have just listened to for a long time, and where I imagined their particular sound, their universe…” Some of them were people he had met maybe just once, people for whom he had what one might call a “musical crush”. The guests he wanted to invite were Nguyên Lê, Nils Petter Molvaer, Vincent Peirani, percussionist Steve Shehan, electric bassist Carles Benavent... The plan was as follows: the guests would be invited to play over cello tracks he sent them. They would record their contributions when and where they wanted: “I recorded all of the cello tracks here in a little studio near Valencia. I sent the guests deliberately minimal instructions as to what or how they would play.”

But would Matthieu Saglio’s bold plan for each track and for the album as a whole actually work? Would all the proposed guests would accept to take part?. One by one, they did, starting with Nguyên Lê. And then the next stage: when he received the recordings back from his guests, having given them such free rein, would the reality match up to his dream? In fact, those turned out to be the very moments when Saglio knew that the project was taking its true shape, as he had hoped. “Each time it was a magnificent surprise!”, he remembers.

One reason why “El camino de los vientos” works so well is that the listener instantly knows in each track exactly where they are – and not just geographically but emotionally too. The titles of the tracks, often in the form of just a single word, land us in a different world. “L’appel du muezzin” places us directly in a square somewhere in the Arab world. The cello’s voice carries the call to prayer from a minaret that has echoed through the centuries. The sound of a zarb played by Bijan Chemirani then brings more of a sense of urgency. “Bolero triste” is a poignantly melodic Spanish number introduced by guitar, then lifted by the accordion. “Metit” means suffering or pain in the West African Wolof language, and introduces us to the irresistibly affecting voice of Senegalese singer Abdoulaye N’Diaye. “Amanecer” is the Spanish for sunrise. Percussionist Steve Shehan makes the fast 5/8 groove seem effortlessly natural, allowing the richly communicative trumpet sound of Nils Petter Molvær to float over it. “Atman” is the Hindu word for the soul and introduces the voice of Mathieu’s brother Camille. “Caravelle” gives us the unique musical voice of Nguyên Lê in a memory of Ravel’s “Bolero”. Then two tracks with violinist Léo Ullmann give us a contrasting, higher string voice: first the orchestral arrangement of “El Abrazo” (the embrace) with a lot of multi-tracked voicing, and then the simpler slow waltz of “Sur le chemin”. “Tiempo para soñar” is a catchy, sunny song about life, love, trust and above all optimism from Isabel Julve. “Las sirenas” is an evocative track with eerie cello harmonics which will almost certainly end up in a film soundtrack. And finally “Les cathédrales” takes us into the reflective world of the Bach cello suites – with occasional excursions into fast string-crossing virtuosity à la David Popper.

In “El camino de los vientos” Matthieu Saglio takes us on a fascinating journey. But this album has been made without any of the normal rushing from airport to airport, and without the pressure tightness of time in the studio on anyone involved. Each participant has had the space and the time to be authentically themselves in their natural habitat – and without the carbon footprint of travelling. Technology allied to creative artistry was always supposed to bring us benefits and joys; there is plenty of both to be thoroughly enjoyed on this remarkable album.