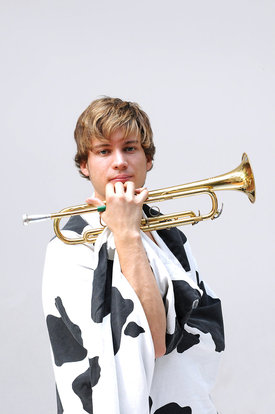 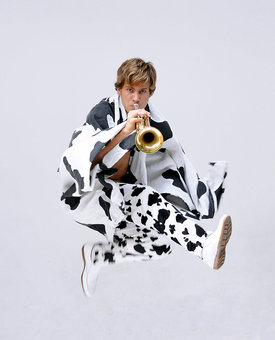 Reflecting on your own background is a feature of jazz in general, but it has also been an important credo for ACT from the beginning. Exploring your own musical tradition can enrich your identity, as evidenced by Swedish jazz musicians Nils Landgren and Esbjörn Svensson on “Swedish Folk Modern”, or with guitarist Nguyên Lê, who explores his roots on “Tales from Viêt-Nam“. For Matthias Schriefl, a young German jazz musician from Maria Rain in Allgäu, this goes without saying. The trumpeter is one of the wildest musical anarchists in Germany but comes from a musical family (his father was a church musician and his brother Magnus is also an excellent trumpeter) and he hasn’t forgotten his roots that lie in the folk music of Allgäu. Nonetheless, it took until his latest ACT album “Six, Alps & Jazz” for this tradition to take centre-stage.

Having run through the typical early stages of the rising star young musician, such as winning the competitions “Jugend musiziert“ (at age 11) and “Jugend jazzt” (at age 17), as well as playing in the prestigious youth big bands (Landesjungend- und dem Bundesjazzorchester), he studied under Andy Haderer at the Cologne University of Music and for one year in Amsterdam. He has tried out different styles and formations from Brazilian music (Brazilian Motions) or modern jazz (with his trio and his own big band) to musical comedy (Mutantenstadl). After playing with several prominent jazz musicians and receiving a number of awards, such as the Star of the Year award of the most important Munich newspaper (ABENDZEITUNG) and the advancement award of the state of North Rhine-Westphalia, the breakthrough came with Shreefpunk, his extraordinary jazz-punk-groove fusion band that broke free of all conventions. With their two ACT releases “Shreefpunk plus strings” and “Shreefpunk live in Köln” the group strived to be “not yet another jazz band that nobody needs,” as Schriefl puts it. Recently he appeared as a regular guest with the new folk music group Unterbiberger Hofmusik. After all this, Schriefl has again returned to his roots.

Astonishment might be the initial reaction when you listen to the first tracks of “Six, Alps & Jazz”, released on the Young German Jazz series; “Der Langenwanger”, a traditional yodel from Steiermark that sounds as if it had its origin in the mountains, is followed by “S’Deandl vom Wintergrea“, a Zwiefacher (a traditional German folk dance) from the Bavarian Forest.

This piece sounds like genuine folk music before there is a metamorphosis à la Schriefl - suddenly, a jazzy saxophone solo is tuned in, Schriefl himself joins in with a modern, syncopated trumpet sound and the tune is quickly expanded, accelerated, reharmonized and renewed.

This is the sound throughout the album – whether elegiac, authentic, fiercely reshaping, serious, peculiar, Alpine or sophisticated. In any case, it is his unconventional journey of discovering and reinventing the tradition music; from the slightly distorted “Andachtsjodler“ to the French sounding classical wind quintet on “Les Alpes vues de Paris”, to “Schlofliadle” that his mother used to sing to him. The line-up is as versatile as the interpretations: a sextet with different guests such as Niels Klein, Bodek Janke or the Citoller mountain climber choir. In the more subdued passages we hear a classical woodwind quintet that turns into a saxophone quartet plus two brass players in an instant. In addition to trumpet and flugelhorn, Schriefl also plays euphonium, sousaphone and alphorn. His regular sextet consisting of Johannes Bär, Peter Heidl, Heiko Bidmon, Gregor Bürger and Florian Trübsbach is equally busy – especially Trübsbach, an excellent jazz saxophonist who can also be heard on clarinet, oboe, piccolo and fife.

In comparison with some lukewarm crossover projects which claim to be Alpine jazz, all this put together results in some truly innovative and improvised new folk music. The woodland meets urban jungle and domestic music mixes with club sounds. A project dedicated to freedom that is full of surprises and good moods – just listen to the cheering audience on “Vorarlberger Problembär“. This song was recorded at a mountain hut called Gruntenhütte at an altitude of 1477 metres, after all the instruments and equipment had been carried up there on skis. Matthias Schriefl offers himself and us “the perfect treat for open ears and musical souls”, as his Austrian jazz colleague Wolfgang Puschnigg describes “Six, Alps & Jazz”. Welcome home to Schriefl’s universe – it’s “Young German Jazz” that hasn’t forgotten its roots.