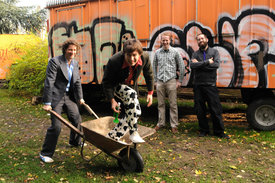 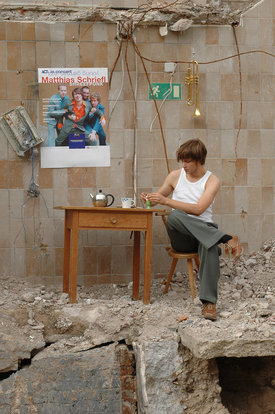 Shreefpunk blasts its way into the heads of its fans with a new sort of jazz – anarchic, having no respect for the listeners’ expectations; nevertheless it has a big love for exhilarating melodies and gripping groves. After its founding in 2003, the four began playing in small clubs, happy to have as many people in the audience as were on the stage. Released in 2007, the studio production Shreefpunk plus Strings (ACT 9657-2) was followed by a phenomenal reverberation from the press, invitations to the most important festivals, and tours of Australia, West Africa, and Europe.
Now comes the release of the second Shreefpunk album, Shreefpunk Live in Köln (ACT 9663-3). Alongside the young musicians on the new CD, there is a long-time star of the subversive scene who has been both captivating and irritating his fans for decades: Django Bates, “One of the naughtiest boys in music ever…” (BBC) – the ideal guest for the audacious fervour of a Shreefpunk live album.
Shreefpunk founder Matthias Schriefl explaines that, “by the time I was 15, I was already a fan of Django Bates’ indescribably crazy music.” Shreefpunk met up with the approximately 20-year-older Bates at the Cologne Philharmonic Hall in October 2008. The results were so phenomenal that, although the album had actually been completed, three of the evening’s pieces were immediately added to the “Live at the Stadtgarten” CD. The recording now spans 73 minutes, and is a veritable monument to a summit meeting of contrarians.
Why a live CD? “We’ve played a lot of concerts since our first CD, and our music has evolved,” says Schriefl. “It was the perfect time for us to capture the power of our band when we play live, all the energy with its rawness and remarkable coincidences.” The record bristles with bizarre phrases; now and then it surprises with the clang of cowbells, bird whistles, a plastic melodica, or children’s toys, and again and again pictures crop up: on “Wien” the wonderfully schizophrenic waltz metropolis flashes by as snow-covered kitsch. As the trumpet begins to solo on “Flying to New York”, the band seems to be flying backwards, and “KVB” tells of lonely figures on over-crowded subway platforms.
In the last years the 27 year old Schriefl has received a host of prizes for his projects and his play as soloist. His most recent one was the North Rhine Westphalia Artistic Achievement Award 2008. The jury said that, “Schriefl’s art is adventurous and allows us to listen anew.” With Shreefpunk Schriefl has built himself a musical home. We aren’t listening to some project hastily put together by telephone; this is a real band. Schriefl and his Cologne friends Johannes Behr (guitar), Robert Landfermann (bass), and Jens Düppe (drums) have developed a level of co-operation over the years of their musical friendship that the British press has recently lauded as “telepathic interplay”. “It’s not very often that there are real bands,” says Schriefl; “the only way you can really evolve musically is to have a group that stays together for some time, like us.”
Shreefpunk often works with a string quartet (Hannah Weirich, Nadine-Goussi Aguigah, Axel Porath und Thomas Schmitz). The string players – all of them renowned freelancers in the New Music scene – uncharacteristically make use of techniques borrowed from soul and folk music, and in so doing they create improvised carpets of sound out of the given material; one can even hear them singing from time to time. After the concert in the Cologne philharmonic hall, a sweat-drenched Axel Porath enthused, “Being onstage with Shreefpunk is incredible! These are stringently composed pieces, but when we start to improvise, all hell breaks loose. You don’t have any idea what is going to happen next.”
Is Shreefpunk punk? Schriefl says, “Think about Plato; he was afraid of musical innovations, because more than any other medium, music can shake the human soul and the laws of the land. When I look around, that’s exactly what the world needs.”