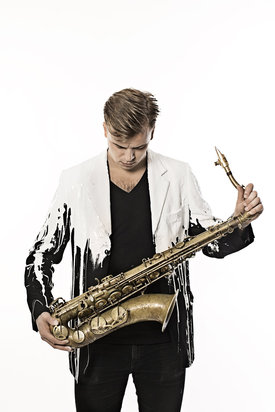 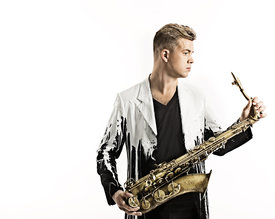 Push the button, see what happens.

Artists prize certain recording studios as much as they do producers or players. The room that adequately captures sound and provides optimal conditions for musicians working at the highest creative level is much in demand, and in some instances it is the location that can be something of a game changer. A studio in an unusual place with a unique ambience or history can greatly affect the act of making music.

Ocean Sound Recordings is a case in point. Built on the Norwegian island of Giske, it wears its name well, offering those who come to blow horns, strike keys or beat drums a grandiose view of the Atlantic.
It was here that Marius Neset, the 29 year-old Norwegian saxophone prodigy who has made major waves on the European jazz scene in the past three years following the release of the lavishly acclaimed albums, 2011’s Golden Explosion, 2013’s Birds and 2014’s Lion, a collaboration with the Trondheim Jazz Orchestra, spent five days with his band in the spring of 2014.  The experience has hardly ebbed from his mind. “The studio is in a big house, and the musicians who use it, get to live on the second floor,” Neset explains. “It’s the most amazing feeling to be in this space where you’re surrounded by nature. We all worked from early morning until late night but you’re aware of this unique environment all the time. I mean it’s just two minutes walk from the studio to the beach, so it was a very special place to make music.”

Pinball, the fruit of those endeavours, is arguably the strongest artistic statement Neset has made to date insofar as it acts as a dual showcase for his gifts as an improviser and composer. It also unveils an international band where the whole is greater than the sum of the not inconsiderable parts. The long-running creative relationship between the players has no doubt been a major contributory factor to this cohesion. Norwegian drummer Anton Eger, who also co-produced the album, is a long-term associate of Neset’s, having worked with him on Golden Explosion and Birds. The two musicians previously lined up with the Swedish double bassist Petter Eldh in People Are Machines. Furthermore, Eger gigs regularly with pianist Ivo Neame in the highly successful trio Phronesis, so Neset’s core rhythm section hardly comprises strangers washing up on an unknown musical shore. As for vibraphonist Jim Hart he has been playing with Neame for many years.
Neset was more than happy to dive head first into this talent pool. “It felt really good to be right in the middle of a band again. I loved doing the project with the Trondheim Orchestra, but that was more about composing and arranging. This is my group. I love being right in the middle of the music. I’m playing much more here and that’s what I really I love to do. But they're great to play with, so it makes sense.” This move back into a soloist spotlight is a timely reminder of why the jazz world pricked up its ears when Neset emerged several years ago. His virtuosity, from the bedrock strength of tone to the torrents of phrasal ideas, extends a rich lineage of sax giants that runs from Chris Potter to Michael Brecker back to one of their key role models, Joe Henderson, but also references the more serene ways of Jan Garbarek. While Neset’s improvising has lost none of its cascading verve his new compositions mark a considerable shift compared to previous material.

Rhythmically and harmonically, there are constant flashes of the multi-layered vocabulary of the pioneers who bridge jazz and non-western folk music, namely Hermeto Pascoal, Joe Zawinul or Trilok Gurtu, above all in collaboration with the aforesaid Garbarek. Yet there is a distinct digital age slant to the groove, a kind of sharply quantized jitter that offsets the lyricism of many of the themes. This flows from Neset’s key aim: the clarity of the song amid all the choppy percussive action. “I think the focus is on strong melody compared to my other work, though the music is still complex. There are still difficult polyrhythms and challenging harmony, but I think that the melody is kind of holding things together. You know, I was able to sing them a lot myself. So at times the music can be complex and almost a bit chaotic, but there is a melody, sometimes a simple thing, really, that keeps it all together.

“Pinball is about the fact that anything can happen in the music. We have to react to each other and to ideas in the moment, and that’s what I love about jazz. That’s what keeps it fresh. Golden Explosion and Birds were both albums that were planned as suites, but Pinball is more like a set of songs where every piece can really just stand on its own.” Each of the twelve tracks does indeed have a sense of individual life cycle, which is effectively served by production from Neset and Eger that entailed a considerable amount of work both before and after the studio sessions. The comprehensive involvement of the two players in the recording process has lent the album an identity and character every bit as distinctive as a triangle of earth in a great circle of water.