The Sound of Europe 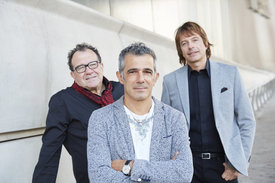 “A lyrical jazz ensemble with a keen sense of composure” (Downbeat, USA)

Sardinian trumpeter Paolo Fresu, French accordionist Richard Galliano and Swedish pianist Jan Lundgren form the trio “Mare Nostrum” (meaning our sea, and the Romans' name for the Mediterranean). This band forges connections between the discrete musical cultures of its three protagonists. Countless listeners worldwide have been captivated by their music, by this distinctive 'sound of Europe.'

Fresu, Galliano and Lundgren are dissimilar characters, and yet in this trio these exceptional musicians with their different cultural heritages have found an alliance which fosters their affinities and creates symbiosis. They play instruments from different families, and yet together they combine to create an ideal sound. Each of the three is a compellingly melodic player. Each has worked to extend the perceived boundaries and limitations of jazz. Each has explored within his national musical tradition, and since all three grew up within a few miles of a shore-line, the sea has more than just a symbolic role: it is a constant presence, a source of inspiration, and the starting point for all kinds of journeys and encounters, real and imagined.