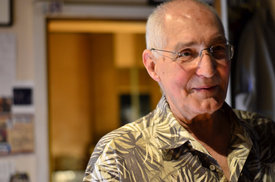 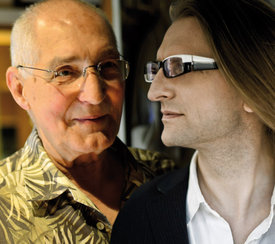 Recorded live at the A-Trane Berlin on Nov. 2nd, 2008 by Holger Schwark and Gero Meissner

No one with a background in jazz, who ever experienced a performance of the American Walter Norris, would doubt that he saw a true master of jazz piano: Walter Norris, who was born in Little Rock in 1931, started taking classical piano lessons at the age of four. As a teenager he was so impressed by boogie-woogie pianists that he started playing jazz. After graduating from high school his first professional jobs were in a quartet of the blues musician Mose Allison and in the Jimmy Ford quartet. From 1954 to 1960 Norris was a part of the west coast jazz scene of Los Angeles and played with all famous local musicians – Stan Getz, Dexter Gordon, Johnny Griffin, Charlie Mariano, Herb Geller. In 1958 he appeared on Ornette Coleman’s legendary recording “Something Else!!!”. Two years later Norris went to New York, where he worked at Hugh Heffner’s Playboy club from 1963 to 1970, first as a pianist and then as artistic director. Norris explains: “So maybe it was not a jazz club in the traditional sense of the word, but people like Oscar Peterson came in and played there. As artistic director I encouraged my musicians to accept all sort of jobs and we were then sent a replacement. So we got people like Ron Carter or Tony Williams as replacements! Monty Alexander was working there and Herbie Hancock used to drop by regularly. It was an amazing atmosphere for a pianist.”

Norris came to Europe with the Thad Jones/Mel Lewis Orchestra in the early 70s and recorded several albums including the acclaimed LP “Drifting” with George Mraz. After a short stay in New York with Charles Mingus Quintet, he accepted a job in the Berlin SFB Radio Orchestra in 1977 and moved to Berlin permanently. He later became a professor for jazz piano at the Berlin Music University “Hochschule der Künste” and continued working as a composer and musicologist.

It was in Berlin where he first met Leszek Możdżer and the luminous star of Polish jazz piano recollects, “It was in the 80’s and I was still a teenager when I listened to the music of Walter Norris for the first time at a friend’s flat in Berlin. I was fascinated by the intensity and originality of Walter’s playing from the first moment on and ten years later he came to a concert of mine at the Berlin Polish Institute. We quickly got to know each other and I was deeply impressed by his personality, openness and helpfulness.”

Możdżer then suggested Norris and him collaborate for a couple of concerts in Berlin and Poland. They developed a concept, rehearsed together, and on November 2nd, 2008 they played live for the first time on two pianos at the Berlin jazz club A-Trane, a place where Walter was a regular musical guest. “The concert became one of these rare, great experiences for everyone involved – full of true music, deep but making everyone smile with bliss at the same time,” Możdżer recalls. The concert remained their only collaboration: On the night of October 29, 2011, Walter Norris died in his home in Berlin at the age of 79. After one year, almost to the day, ACT releases “Last Set – Live at the A-Trane”, a recorded dialogue between the two outstanding pianists and extending the legacy of an unjustly unknown artist. As Możdżer explains, “Walter didn’t have a big career, he just played music. He was a true artist, though he often shone in the background, and it is about time someone drew attention to him”. This could be achieved posthumously with this album, on which two soul mates meet. Both of them have an extraordinary depth of expression precisely because, despite their background in classical music, they know no stylistic limits.

On the eight long improvisations chosen by Możdżer on “The Last Set – Live at the A-Trane” the playing of the two is perfectly intertwined. On pieces dominated by the rhythm, melodically minimalistic parts (“From Another Star”), classically romantic sounding bits (“Reflective”) or up-tempo pieces which build up to chromatic peaks (“Tsunami”), you can constantly hear the exchange of ideas and the abundance of emotions and ideas influenced by different musical eras and seldom heard in such a symbiotic and “classic” way.

“The Last Set - Live at the A-Trane” is the impressive and worthy legacy of a unique musician full of curiosity, versatility, persuasiveness, a strong attitude and technical brilliance which live on in both Możdżer’s playing as well as on this recording.