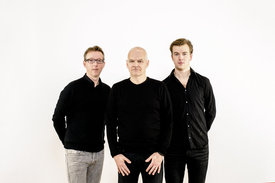 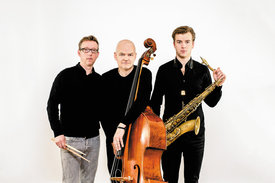 It happens so rarely nowadays. Three musicians, who all make their homes in Copenhagen, met for the very first time as a trio in a studio. That initial encounter was recorded, and an extremely fine record is the result.


The instigator was Danish drummer Morten Lund. The seed was sown in a conversation with Norwegian-born saxophonist Marius Neset and Swedish bassist Lars Danielsson, when all three were travelling back by train to Copenhagen from Jazz Baltica in 2012. That encounter gave Lund the idea that a session like this could work. Danielsson and Lund were already familiar with each other from their work in groups led by Caecilie Norby and Ulf Wakenius. Marius Neset had hardly ever played with either the bassist or the drummer. “The saxophone/ bass /drums trio gives space and freedom”, says Lund. “I felt that the three of us had same passion for trusting the moment.”

So, when the owner of Copenhagen's Millfactory studios offered Lund a free day at the studio, he put the idea to the other two musicians that they could bring three or four songs, and play “with as little preparation as possible.” He also had the foresight to invite Siggi Loch to record the session.

The three musicians arrived at the studio on Thursday April 3rd 2014, ready to start work at 2pm, and by the time they emerged some five or six hours later, they knew they had created something very special.

Lars Danielsson remembers vividly how the session got going: “It all went so smoothly. The best thing about improvised music is when it has a flow, and we could feel that directly after the first take of “Little Jump”. That very first take of Danielsson's blues composition is the one which has found its way straight onto the album.

Marius Neset normally plans and organizes his recordings thoroughly and meticulously, so in his recorded output “Sun Blowing” is in many senses the exception, the outlier. Neset remarks: “This was definitely something else from what I am used to. It's a different way of making music, much more open and free. Quite a lot of it was about finding each other by playing.”

And what was Neset's method with these previously unheard compositions? “I was thinking all the time: how would I play it if I had written it?” That strong sense of inhabiting and owning the work comes across astonishingly strongly in Neset's playing. When talking of Danielsson's “Blå” (blue), for example, Neset had just one thing to say: “It felt like home.”


There was a naturalness about the whole process. The tracks were recorded “as live” on acoustic instruments and mostly in long single takes. The exceptions to that rule are an overdubbed second saxophone part on “Evening Song For B”, and also that Danielsson changed the game at the session itself on a couple of tracks, by creating a subtle veil of programmed harmonies.

The three achieve miracles throughout, both in settling into grooves and in giving compelling shape to the freer sections. but what also shines through is Neset's innate sense of pacing .The emotional heart and the longest sequence is Neset's composition “Salme” (Psalm) which proceeds naturally through free, improvised, rhetorical sections recalling the keening sound of Jan Garbarek, but also settles into funky grooves before disappearing into the sound of abstraction. It is a piece which Neset had performed in duo 3-4 times with Daniel Herskedal, but this is the first recording of it.

Another slow number – the only composition not by the members of the band - recalls Michael Brecker: it is Don Grolnick's “The Cost Of Living”, a tune suggested by Lund. Brecker is a common thread in all three musicians' lives. Danielsson toured in Europe with him in the 1980s, Lund played in a duo with him in a workshop situation, and Neset is the first to acknowledge Brecker as a massive influence. In this recording, Neset was determined to depart from the original, which he progressively does. The closing section has a remarkable series of enclosures and monotones. Neset escapes off finally into the other-worldly sounds of reed slaps and unvoiced breath, yet never losing a sense of telling a story.

According to the studio website, “the walls of the Millfactory studio have a long history.” Like the painters of the Italian buon fresco tradition who had the courage to work directly on wet plaster, these three fine craftsmen have put in a very fine “giornata”. Or, as Lund recalls the mood at the playback on the day after the session: “It was like: Wow – did we really do that?!”