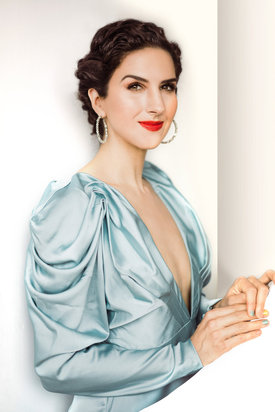 The music of Canadian singer, songwriter and pianist Laila Biali continues the tradition of great contemporary Canadian artists like Joni Mitchell, Leonard Cohen, Diana Krall or Michael Bublé who completely organically and naturally fused influences of Jazz, Pop, Blues, Soul with the power of great songs. With ease, Laila Biali combines the concision and accessibility of pop with the energy and openness of jazz - in her strong and diverse original compositions as well as her interpretations of the music of artists like Coldplay or David Bowie. Laila Biali is an impressive example for a generation of current jazz musicians for which “pure” Jazz is a contradiction in itself and more than anything else an extremely versatile music in which, beyond the polished, over-formated “mainstream”, real musicians and real authors create deep, honest emotions. A music full of passion and intellect, performed with soul and skill. Just like the music of Laila Biali – the new great voice of North-American Jazz.

The last few years have been a roller-coaster for Laila Biali.

For nearly every major triumph—a highly acclaimed return to jazz, winning the JUNO Award for Vocal Jazz Album of the Year, touring the world—the singer-songwriter has faced a private debilitating crisis. In just a few short years, Biali lost a close friend, mourned a family member, and dealt with health challenges of her own. It was a period of change and heartache—but it was also a season of great inspiration and hope. The result is Biali’s deeply personal new album, Out of Dust.

“These new songs took shape as I processed my own feelings of doubt and loss,” Biali reveals. “I believe that nothing is wasted, that even life's greatest trials can produce something meaningful, if only to make us more empathetic to the struggles of those around us.”

This hard-won optimism is apparent in the music. Instead of giving into the darkness, Out of the Dust finds Biali luxuriating in the light. Co-produced by Biali and her husband, Ben Wittman, the album is a celebration of life; warm and uplifting even as it confronts her recent challenges (and the current political climate!) head-on.

The political is personal on the brassy album opener, “Revival.” Transforming global tumult into an inspiring call-to-arms, she sings with the clear-eyed confidence of a warrior, “Come on down / There’s a fire underground!” This fervor animates the entire album, even its quieter, more personal moments:

“Wendy’s Song,” a piano ballad dedicated to the friend she lost, turns the details of a single life into a powerful epic; “Glass House,” which she co-wrote with her husband, frankly addresses the after-effects of a family member’s struggle with mental health issues; “Take the Day Off” bluntly acknowledges the reality of healing with Biali singing that it’s OK to “pull the sheets over your head” and “unwind” when you need to. Even “Take Me To The Alley,” the album’s sole cover, holds special meaning for Biali: she sang an ethereal version of the Gregory Porter song at her friend’s memorial.

“There's a line from a song by the indie gospel group, Gungor, that has become like an anthem to me,” Biali says. “‘He makes beautiful things out of dust.’ That's where the title for the album comes from, and as a songwriter and musician, my ultimate intention and hope is to spread a little more love.”