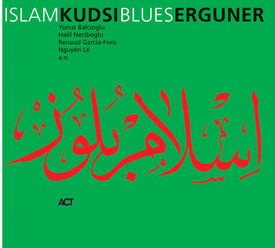 "Top-level World-Music", " a dazzling, image-rich album", "outstanding" were some of the words the press used to praise Kudsi Erguner’s 1999 CD Ottomania. The CD brought together the classic music of the Ottoman empire with the improvisation of three top jaz musicians, saxophonist Christof Lauer, tuba player Michel Godard, and drummer Mark Nauseef.

With Islam Blues the Ney (reed flute) virtuoso Kudsi Erguner has expanded the dimensions of the impressively successful Ottomania. It can be a new milestone in Erguner’s remarkable career. He has written film music for, among others, Martin Scorsese (together with Peter Gabriel) and Peter Brook, produced ballet music for the great choreographer Maurice Béjart and, in an acclaimed Salzburger Festspiele production, brought out the oriental influence in Mozart’s "The Abduction from the Seraglio". The son of Ney master Ulvi Erguner, Kudsi was born in Turkey in 1952. As musician, musicologist, teacher, author, and translator he has involved himself in the stimulation and revival of Turkish tradition, and again and again crossed musical borders with exciting results - which is natural for someone who has lived abroad (Paris) since his student days (from 1975 on).

In Islam Blues Sufism, the teachings of the wisdom and mysticism of Islam, plays an even greater roll than in Ottomania. Erguner has been involved in Sufism since his childhood. He visited Sufi brotherhoods and thus absorbed its teachings and music. By 1988 he had recorded Sufi music - "The Mystic Flutes of Sufi", a prelude to the dancing dervish ceremonies. This time the music is not only played - it is also  sung; for Islam Blues two singers were added to the ensemble. Hymns of praise to the Prophet Mohammed, maxims, and love poems by authors from the time of the Prophet compose the literary texts of this album. Erguner leans on the practice of the "Zikr" rites: in these meetings the dervishes invoke the name of the Prophet while the music accentuates the ceremonially induced feelings of ecstasy. With his compositions Erguner translates the atmosphere of these ceremonies into the universal language of music, a music which remains very near to the source, and yet flows into the endless ocean of sound.

Besides Mark Nauseef, Erguner’s jazz guests this time are the great contra-bass artist Renaud Garcia-Fons and the exceptional guitarist Nguyen Lé. Lé is the son of Vietnamese parents and grew up in Paris. He is a masterful wanderer between disparate musical worlds. The Algerian multi-instrumentalist Karim Ziad, who took a "North-African trip through Paris" on his impressive CD Ifrika (ACT 9282-2), takes over the drum part on the piece "Twins". There is a real symbiosis between the jazz musicians and the Turkish ensemble: while the immensely soft and tender sounding Turkish violin comfortably modulates almost like a jazz instrument, Nguyen Lé’s guitar and Renaud Garcia-Fons’ bass can almost pass as Oriental instruments. And Erguner’s flute, this story-telling reed flute - has long since been at home in both houses.