Knut Reiersrud
Tears Of The World 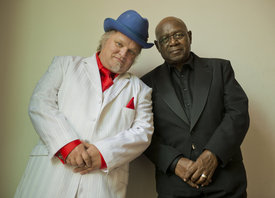 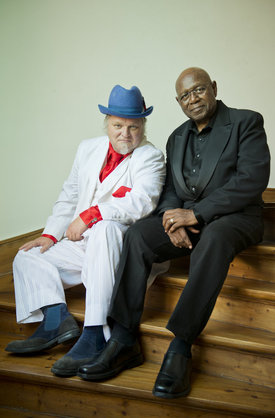 Even Norwegians get the blues. On “Tears Of The World,” guitarist Knut Reiersrud and his band find themselves in the company of the 72-year old vocalist Mighty Sam McClain, originally from Louisiana. Together, they have dedicated themselves to the music of the deep south and have given impressive proof that, when it comes to playing hard-driven R&B, soul or blues, it's not where you come from that's important.

In the context of the regular flow of new releases on the ACT label, “Tears Of The World” is patently a stylistic outlier; and yet this detour is not all that surprising, given label founder Siggi Loch's passion for the blues. In Loch's autobiography he describes the experience of what he remembers as the “wildest night” of his life - until then, at least. It was in 1962, and he was at one of the first American Folk Blues Festival concerts. Loch was a rookie producer, just twenty-two years old, and over the following few years, he was to produce the LPs of that legendary series of performances, including the double CD “ Lost Blues Tapes - More American Folk Blues Festival 1963-65”, released on ACT.

Knut Reiersrud hadn't registered on the ACT label's radar until 2014, when he appeared as a member of the “Norwegian Woods” ensemble. This ad hoc grouping was put together specifically for the “Jazz at Berlin Philharmonic” concert series, which Loch curates and produces. Alongside vocalist Solveig Slettahjell, guitarist Bugge Wesseltoft and the band In The Country, Reiersrud caught the ear, people hadn’t heard anything quite like it before. His guitar playing combined the deep hues of the blues with the beautiful simplicity of Norwegian folklore. He seemed to create a force field of spirituality and energy around Solveig Slettahjell, finding a multitude of ways to enhance her live performance.

In his youth, Knut Reiersrud jammed with the likes of Buddy Guy and Otis Rush in the hallowed halls of Chess Studios in Chicago, Dr. John and Doc Pomus used to write songs for him, and the Blind Boys of Alabama and several world music stars would appear as guests on his records. His playing is innovative, and points in directions well beyond the horizon of the blues. Comparisons have been made with artists as varied as Derek Trucks and the Indian string virtuoso Vishwa Mohan. His music has brought him together with cult figures in the guitar world such as David Lindley and the avant-garde icon Henry Kaiser. The 54-year old has made the combination of church organ and guitar very much his own, with new arrangements of old folk songs. His fellow countrymen have responded by coming to churches in their droves to listen. And whether it's in Africa, the US, India or Nepal, Reiersrud seeks – and invariably finds - new ways to align different cultures and to make them compatible through music.

A few years ago, Reiersrud produced a collection of love songs with the Persian singer Mahsa Vadat and Mighty Sam McClain. From that meeting emerged a friendship between the Norwegian and the blues and soul singer. In 2011 they released their first album together, “One Drop is Plenty”, to which “Tears Of The World” is the follow-up.

Mighty Sam McClain has been singing the blues for half a century, tinged with an energy-boosting helping of soul. Since the deaths of Solomon Burke, Percy Sledge and of McClain's great inspiration, Bobby “Blue” Bland, the soul preacher and blues-man has held the status of the only surviving R&B singer of the first generation.

Reiersrud and McClain selected the songs on “Tears Of The World” together. The two men have included classics from the repertoire of legendary R&B labels such as Hi Records, a country number from Carlene Carter, and “Que Sera, Sera,” not exactly a typical blues song, which is given the full rock apotheosis treatment. There are also, as is to be expected, songs written by Sam McClain and Knut Reiersrud themselves.

There's a Hammond B3 spitting and snarling, plus other keyboard instruments too. The brass players can give you either razor-sharp funk or swooning gospel. The string section wears its heart on its sleeve, and these backing singers are celestial. All this happens alongside an earthily grooving rhythm section, ready to propel the arrangements of Reiersrud and of his band colleagues. The guitarist himself can also switch to blues-harp, and shares the vocal duties on “Que Sera, Sera” with Sam McClain.
“Sam” says Knut Reiersrud, “is – and by some margin – the best singer I have ever worked with. I have recorded with singers from all parts of the world, but a depth and an intensity like this, there's nobody else who gets there except him.”

For that reason, Reiersrud is happy to take a back seat on this, his label debut. Fully in keeping with an album devoted to blues and soul, the guitar virtuoso is of a mind to preach that “the focus should be on the singer.” Such a statement might ostensibly show modesty, even deference, but as a musician he's in the pocket every time. Whether he is referencing B.B. King in his own composition “Living In The Key Of G,” or adopting the strident style of an icon like Albert King in “Things Ain’t What They Used To Be,” or indeed when he tries experimental and exotic note-bending reminiscent of an Indian Mohan Veena lap guitar, this is a guitarist who always makes the blues sound as if they have undergone a thorough-going overhaul.

On Tuesday morning, June 16, 2015 the Grammy nominated Blues & Soul singer Mighty Sam McClain died at the age of 72. Since the deaths of Solomon Burke, Percy Sledge and of McClain's great inspiration, Bobby “Blue” Bland, he was one of the last great R&B voices of the first generation. His artistic work in the last years was determined by the collaboration with Norwegian guitarist Knut Reiersrud with whom he recently recorded „Tears Of The World“. This last album will be released on ACT Music and will remain a part of an impressive legacy.

On June 16, 2015 Mighty Sam McClain died at the age of 72 years. „Tears Of The World“ is his last album and will remain as his legacy. The Blues- & Soulworld lost an outstanding artist.