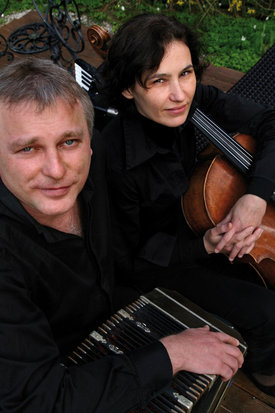 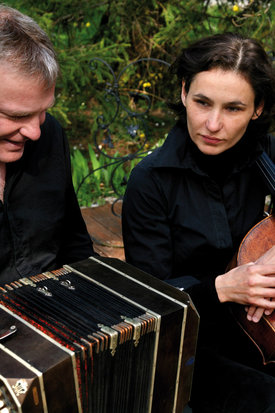 As her instrument, the cello, would indicate, for a long time Asja Valcic’s career gravitated around the world of classical music. But within the classical venue she has had a diverse schooling. She obtained the basics at the music academy in her hometown Zagreb, then went on to study in Moscow at the Tschaikovsky Conservatory, in the USA at the University of Massachusetts, and in Germany at the Detmold College of Music. With such a wide variety of techniques and concepts under her belt, she went on to win the „Concours international de jeunes concertistes de Douai“ (International Competition for Young Concert Artists in Douai, France) in 1995. She played with some of the most important chamber music musicians ranging from players with the Brodski and Brandis Quartets to the Orlando, Melos, and the Alban Berg Quartet. Her recordings of the sonatas of Schostokovitch and Schnittke were highly praised, and the recordings of Martinu’s Serenades won the German Record Critics’ Prize.

Valcic’s versatility and the connected search for new means of expression led her to the “radio.string.quartet.vienna” and through the co-operative project Radiotree (ACT 9473-2) to the accordionist Klaus Paier. À Deux (ACT 9478-2) shows that this path has led to the perfect duo. Seldom has one instrument so perfectly complemented the form and style of the other. Valcic plays the cello with such flexibility and fury that she sometimes sounds like a complete string quartet, at times with elegant lines, sometimes extremely rhythmically, at times plucked or struck, sometimes simply utilised as a percussion instrument.

Klaus Paier stands out as one of the most important players on the contemporary scene because of his ability to straddle the borders between musical worlds and his influence as a composer. It’s revealing that Paier names Thelonious Monk, Keith Jarrett, and Charles Mingus, two pianists and a bassist, as his most important sources of inspiration in developing his unique accordion style. Close on their heals comes Dino Saluzzi, who indoctrinated Paier in the secrets of the Tango Nevo and the bandoneon. Thus stylistic freedom is central to Paier’s concept: he was already experimenting with classic and contemporary music during his accordion, jazz, and composition studies at the Klagenfurt Conservatory in Austria.

But freedom needs form: Paier says that, “For me, the sound is always the most important thing.” That’s why ever since he was eight years old, Paier has been trying to expel the unclear phrasing and oppressive denseness that is typical to the accordion’s sound. He has achieved this with a particular co-ordination of the bellows and specifically orchestrated arrangements. And so there is a personal tone, a unique language that enables him to add a wealth of new ideas to the usual stylistic mix. Paier has long ago learned to adjust to the requirements of the particular music: in duo with saxophonist Gerald Preinfalk the direction is more experimental and “modern”, in trion with Stefan Gferrer and Roman Werni more jazzy, and when playing with string quartets, classic – at any rate this was true before radio.string.quartet.Vienna came along.

In duo with Asja Valcic’s protean cello Paier is given the perfect opportunity to play out every facet of his musical personality, from the classical “Argentino” to wild Tango Nuevo with “Tango Loco”, from the musette-like sound of “La Pirouette”, and folk song feel of “Singing Bird to the East European “Seven 4”, and from the classic-sounding “Minuet” to the jazzy improvisation of “À Deux”. À Deux opens doors that were closed up until now – and not just to the cello and accordion.