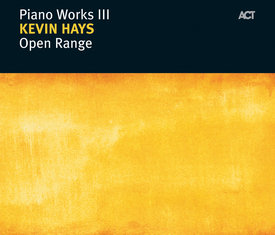 Recorded, Mixed and Mastered by Adrian von Ripka at Bauer Studios, Ludwigsburg on March 31 and April 1, 2004
Produced by Siegfried Loch

A multi-facetted recording from the land of enchantment:
The solo CD "Open Range" from Kevin Hays

The title "Open Range" best describes what is to be heard on this exceptional recording by American pianist Kevin Hays. He has an enormous range of expressive forms. Hays shows himself to be open to a wide range of musical influences and aural ideas. "Open Range" is not a piano solo album in the usual sense of the word, but rather should be considered as a solo album by a pianist. Hays also sings, adds sampled string sounds and layers the sounds of the piano and a Fender Rhodes on each other.

Thus we have a wide-ranging self-portrait of the American musician, who was born in New York City in 1968 and has worked with colleagues such as Bob Belden, George Coleman, Benny Golson, Roy Haynes, Joe Henderson, Vincent Herring, Joshua Redman, Sonny Rollins and John Scofield. Hays can already look back on an impressive career. Working as a professional musician at the age of 15, he was playing with baritone saxophonist Nick Brignola at 17 and releases under his own name have been notable, not least "Andalucia", recorded in 1997 with Jack De Johnette and Ron Carter, which received a four-star review in Downbeat.

Now "Open Range" shows whole new facets of Kevin Hays’ music, and that is due to his new lifestyle. After 15 years in New York he has moved to Santa Fe in New Mexico. "I needed a change of scene", he says, "and the new surroundings are clearly reflected in the music".  He lives outside the city and every day sees why New Mexico is called the "Land of Enchantment". "There are incredible sunsets and the light and sky are amazing". His current lifestyle is a total contrast to his previous life in New York. He appreciates the solitude and the mountains.  "And here there are even humming birds and tumbleweeds".

After this description, it’s no surprise that the pieces on "Open Range" have so many introspective moments and radiate so much peace, so that they always develop new sound worlds. On the one hand there is the opening track, which with a trill over a falling bass line seems to be a sort of homage to baroque music. In "Homestead" a ghostly echo of the main sound of the piano swings in the background, and is augmented by haunting vocal apparitions.  Hays has reworked traditional native American songs in the piece "Humming Bird Song" - gentle complex chords accompany the voices which he has taken from academic recordings and finds fascinating.  Hays sings "You Are My Sunshine" himself in a slow bluesy reflection.  The piece ends with two voices overdubbed and a string sample, that transform it into a musical version totally divorced from the original. "I lay my fingers on the keys and see what happens", is how he describes how he came to this arrangement.

In some of the pieces, such as "Improvisation", "Fire Dance" or "Sacred Circles", it’s clear what Hays means when he says that he is particularly interested in "finding a balance between familiar and unfamiliar harmonies". Easily absorbed harmonies constantly rub shoulders with more complex, which together lead to an exciting turmoil. In "Meditation" he by contrast stays with a single chord, given as a droning bass, over which the voices and Fender Rhodes piano pull the listener into a sphere of magical contemplation. During the performance of "Harmonium", which begins with a noisy interplay, Hays dampens the piano strings in various positions and creates a shimmering dance of the overtones.

Kevin Hays has taken advantage of the great opportunities a studio-based solo performance offers. To be able to explore sounds, to constantly play with form, harmony and rhythm thereby allowing the music to become a personal statement. "You have the chance to follow intuition, to make the actual recordings for themselves and from musical ideas. An enormous freedom can develop from the narrow focus on one musician."  Hays has used this opportunity in a variety of different ways in the eleven tracks of "Open Range". He has created his solo self-portrait in an almost pointillist manner, delivering a complete picture in front of which one can linger a long time, always discovering new effects of colour and form. "Open Range" indeed - both for observer and hearer.