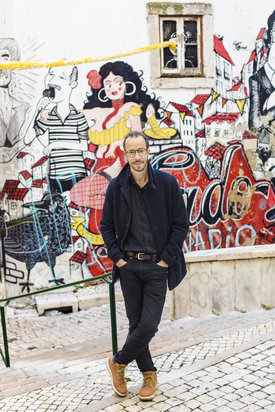 “Since 1992 ACT has been building its own European union of musicians, fostering a freedom of movement between nationalities and genres and has given us an authentic impression of what the continent is about.” This statement by The Times couldn’t be more fitting for the signing of Portuguese pianist and composer Júlio Resende.

His ACT debut “Fado Jazz”, which will be released on February 25, 2022, shows yet another, previously un-heard side of European jazz: Translating the bitter-sweet “blues”, but also the brighter side of Fado music into the language of jazz. Being a true pioneer in this field, in his home country Portugal, Resende is already an established artist, filling classical concert halls, leading the pop charts with his recordings and collaborating with international stars such as Fado singer Amália Rodrigues or, in duo, with classical piano star Maria João Pires.

"What Julio Resende does with Fado, reminds of what Keith Jarrett does with jazz standards." (El Pais, Spain)

“Since 1992, ACT has been building its own European union of musicians,” wrote The Times (UK) in 2020, “fostering a freedom of movement between nationalities and genres, and has given us an authentic impression of what the continent is about.” This statement becomes particularly resonant and relevant again with the signing of an artist new to ACT, Portuguese pianist Júlio Resende. "Fado Jazz" marks his debut on the label, revealing another fascinating dimension to European jazz, and one which has been relatively little heard: Resende’s art is not just to translate  the bittersweet melancholy of fado into the language of jazz, but its lighter side as well. Resende is a genuine pioneer whose profile within Portugal is already substantial. He fills classical concert halls, he has been high up in the Portuguese pop charts, the tribute he made in 2013 to the “Queen of Fado”, Amália Rodrigues, was particularly well received, and he has  also performed in a duo with classical piano legend Maria João Pires. His music has also been heard accompanying series on both HBO and Netflix. The leading Spanish broadsheet newspaper "El Pais" says of him: "Júlio Resende's approach to fado is reminiscent of what Keith Jarrett does with jazz standards"; and Alex Dutilh, one of the most renowned and influential jazz journalists in France, says: "Júlio Resende, the latest discovery on the Portuguese scene, is also the most promising. His playing is on a par with pianists such as Stefano Bollani or Yaron Herman."

For the Portuguese, fado is anything but a museum-piece, it is music which represents an attitude to life. On the one hand it is history which is being lived through, while on the other it is  constantly in a state of flux. It carries with it a whole sweep of history, from stories about the anguish of girls and women as their sailors and menfolk leave them for the high seas, it takes in the oppression of the Salazar regime, then the hopes of the Carnation Revolution in the 1970s, right through to the lively, cosmopolitan Portugal of today. And just as society has metamorphosed, so the varieties of fado and the ways it is perceived have changed too. The icons of this music are national heroes, while the younger performers connect with an audience of their generation as a matter of course, and this in its turn inevitably opens fado up to other influences, such as pop music and the musical traditions of other cultures.

Júlio Resende's view of fado from the perspective of jazz is something new, but it has developed organically and naturally from what had gone before. His intentions have nothing to do with crossover. As he says: "I really don't know if what I do is fado or jazz. Maybe it is both. I don't want to commit myself, because if you commit yourself, you stop developing. I prefer to move freely, like the sounds themselves."

Almost all the tracks on "Fado Jazz" are original compositions by Júlio Resende, which gives another clear signal that he is not concerned with either adapting and re-configuring the past, but rather with developing the music further. The opener "Vira Mais Cinco" is an example of this. Here we find an irresistible melody, the unique sound of the Guitarra Portuguesa, the lute-like instrument that is part of the traditional fado line-up and that creates a unique timbre from the influences of North Africa and Southern Europe that are so characteristic of this music. But there are also piano, percussion and double bass, by no means classic fado characters, but which nonetheless sound as if they had always and naturally belonged to it. And finally, the piece dances in 5/4, which gives it a twist that is as unusual as it is organic. It is these connections that make Resende's music sound so new and interesting, and yet at the same time accessible and natural.

Fado, in both its traditional and modern forms, has become popular way beyond the borders of Portugal, and that is at least in part because of the wonderful voices associated with its main exponents, and their ability to convey feelings so immediately and vividly. But there is more to Fado’s appeal, namely the melodies which speak so directly to the heart and bring audiences to the brink of tears. And there are plenty of those on the album "Fado Jazz": ballads like "Lira", "Este Piano Não Te Esquece", "All The Things - Alfama - Are" or the gyrating "Fado Blues" and the simply stunningly beautiful "Tiro No Escuro" play with the feeling of "Saudade" (longing and melancholy) so typical of fado. But there are also pieces with a much lighter step, such as  like "Vira Mais Cinco", "Fado Das 7 Cotovias" (in 7/4), the lively "Fado Maior Improvisado" or the bolero-inspired "Tiro No Escuro". And at the very end, we hear a voice, that of the young yet massively popular “fadista” Lina, who, in Júlio Resende's composition "Profecia" finds a magical yet completely unsentimental way to express every luminous nuance.