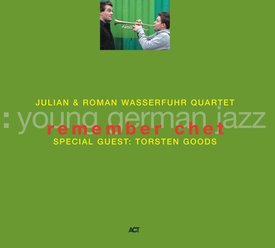 "Young German Jazz" enters the next round, and once again it draws attention to the many highly talented and promising young German musicians, that make up a scene that needs to fear no international comparison. The ACT-series "Young German Jazz" not only documents this, it also wishes to support these musicians and help them gain recognition in- and outside the country. The reaction so far has been overwhelming, and rave reviews from abroad prove that young German jazz is perfectly capable of successfully crossing borders. The best example may be the trio [em] grouped around the young shooting star Michael Wollny. The "Süddeutsche Zeitung", among other publications, claims that Wollny is already in the top league of German, maybe even of European Jazz-musicians. In France (jazzman) and in England (jazzwise) the album was mentioned among the best new releases of 2005.

The story of this latest release in the series, "Remember Chet" begins with a chain of coincidences: Some years ago Julian Wasserfuhr was given a Chet Baker record by his father and his brother. They hadn’t been looking for Baker; it was the cover of the album that caught their attention. But their choice was to prove consequential, the first impression to prove correct. Julian immediately realized: "This is how I want to sound." In the meantime he has come a lot closer to his ideal of a sound rich in timbre, with shadings that reach from crystal clear to brittle.

One might accuse him of being a mere stylist, but that would not be doing him justice. Every young jazz-musician needs role models (besides Chet, Julian Wasserfuhr also mentions Till Brönner). Listening to and following these older and more experienced musicians helps them to find their own path through music. Ever since he picked up the trumpet at the age of seven, Julian has been negotiating large parts of this path together with his brother Roman Wasserfuhr. As a pianist, drummer and composer, Roman compliments Julian ideally.

With "Remember Chet", ACT is releasing the brothers’ debut album, and the fifth CD of the series "Young German Jazz". Julian, aged seventeen at the time of the recording, and Roman aged twenty, give full credit to the name and the concept behind this series.

The brothers grew up in Hückeswagen, about 50km northeast of Cologne. Thanks to their parents’ support (their father is a clarinet player and music teacher, their mother a singer) both boys picked up instruments at an early age. They not only shared toys and playground, but also an early interest in music. This relationship enhances their music; their communication is silent and intuitive. In the ballads especially, we can sense the connection the two brothers have. Their lyrical compositions have become Julian’s spotlight; they provide him with the perfect vehicle to feature his warm tone.

Although still young in years, trumpeter Julian already has a number of renowned prizes under his belt. At age eleven he was the youngest participant to win the competition "Jugend jazzt" in Northrhein-Westfalia. He won the young talent competition "Junger Jazzlöwe" ("Young Jazz-Lion") presided over by Peter Herbolzheimer. In 2003 the Landesmusikrat NRW awarded him a special soloists prize, furthermore he was awarded a prizes in the national competition "Jugend jazzt" in duo with his brother, and both of them received a grant from the Berklee College of Music in Boston. Julian was the winner of the "Yamaha Trumpet Contest 2004". In October 2004 he was already the youngest associate student at the Musikhochschule in Cologne; in the meantime he is a full-time student there. He is studying with Prof. Andreas Haderer, the lead-trumpeter of the WDR-big band.

Belgrade born Sava Medan is one of the most in demand bassists in Munich. He plays on numerous CDs and has performed with Chet Baker and Dusko Goykovich. Andi Haberl is also busy; the drummer is said to be a big new talent on drums in Germany. He plays with Johannes Enders and was convincing at JazzBaltica 2005 with his band "Andy Haberls Jazzkatapult". Finally there is singer and guitarist Torsten Goods from Nürnberg, who studied in New York and at age 25 already has two CD’s as a leader to his name.

Listening to these recordings, we get the feeling that Julian Wasserfuhr marches to the beat of a different drummer; he completely disregards the traditional chronology of a musical career. On "Remember Chet" he shows great respect for his role model and for the tradition, yet the way in which he does this, leads us to expect quite a bit in the future.