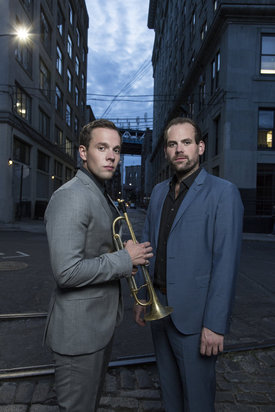 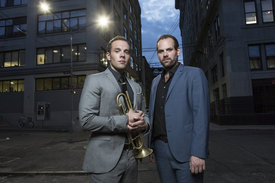 For their 5th album, German trumpeter Julian and pianist Roman Wasserfuhr are in Brooklyn. If Brooklyn were not one of the five boroughs of New York City, its 2.6 million inhabitants would make it the 4th largest city in the United States. And the secret is out: Manhattan may have the establishment institutions like Lincoln Center or the Village Vanguard, but the real action is in Brooklyn, with an abundance of creativity being generated by musicians from the Wasserfuhr brothers’ generation, working in apartments, lofts, bars, clubs and studios.

The rise of the Wasserfuhrs has been meteoric, and “Landed in Brooklyn“ documents another important stage of it. The brothers first came to the attention of producer Siggi Loch when they were 17 and 20 years old, joining the roster of ACT’s “Young German Jazz” series. Their “stunning debut album” (Süddeutsche Zeitung) “Remember Chet” was released in 2006, already showing a distinctive and original sound. “Upgraded in Gothenburg” was released in 2009, with Scandinavian greats Nils Landgren, Lars Danielsson und Magnus Lindgren. “Gravity” from 2011 had a quartet involving Wolfgang Haffner and Lars Danielsson, and told a story of how gravity is defied and overcome. By the time they made “Running” in 2013, the brothers were setting their own pace and direction, composing, recording and producing it themselves.

Julian Wasserfuhr explains the origins of “Landed in Brooklyn: “Siggi Loch called us up last year, and asked if we were interested in making another album for the ACT label. Naturally we agreed – but we admitted that we hadn‘t really given it much thought.” So the idea emerged that the magic of the city of New York, as a force to propel and lift them, should became the concept behind the album. The established musicians they would then meet at the legendary System Two Recording Studios would act as their fountainheads of inspiration.

First and foremost among those inspirers is saxophonist Donny McCaslin, the lynchpin of David Bowie’s last revelatory masterpiece “Blackstar”. Tim Lefebvre, known in Europe for his work with the Michael Wollny Trio, and also a member of Bowie’s last band is equally at home in jazz and in rock contexts. Nate Wood is an in-demand first call drummer and close associate of Donny McCaslin.

Is that enough jazz chops and credibility? Well, there’s more, in the form of a GRAMMY winner, producer Al Pryor whose craft, knowledge and deep experience have brought listeners closer to the musicality and emotion of artists such as Cécile McLorin Salvant, Raul Midón and Christian McBride.

Very little had been agreed or set down in advance when Julian und Roman Wasserfuhr arrived at the studio to meet the top-drawer American players. They had brought the sheet music of some pieces with them, but the guiding principle was to see what would transpire and to let things happen:

“Bernie’s Tune” is a wonderfully optimistic up tempo opener. We’re straight into the ensemble sound that these players achieved without rehearsals, but with big ears and inspired playing. The band is here in its quintet form with guest artist Donnie McCaslin’s saxophone weaving and blending his counter melody with Julian’s trumpet. Julian and Roman’s obvious appreciation of funk and back beats is on display in “Tutto”. Julian’s wicked solo is balanced by Roman’s thoughtful, soulful take on the changes of the song. Nate Wood finds a deep and danceable groove. A power ballad, Tokio Hotel’s “Durch den Monsun”, in a clever arrangement by Julian and Roman, showcases their trademark interweaving of melodic lines. There’s a blistering tenor solo by McCaslin, followed by Julian’s intensely rhythmic triple tongued riffs. Nate Wood closes out the tune with a power drum salvo. On “Tinderly” and “S.N.C.F.” Julian and Donny make their bid for a place among the great front line horn players of jazz calling to mind such combinations as the fire of Freddie Hubbard and the cool of Stanley Turrentine. With Sting’s “Seven Days” Julian and Roman Wasserfuhr own the 5/4 time signature – as jazz musicians do. “Carlo” fuses the energy of this ensemble into the discipline, empathy and majesty that can only be found in a great ballad.

Roman begins the final performance on the record, “First Rays Of Dawn”, just as he began the first: with a motif expressed in his pianism that allows Julian and the band to slip into a rapid and revelatory up tempo waltz; closing out the recording as they began, and in a manner characteristic of what has become a tradition in Brooklyn and beyond: new ideas and the artists who bring them.